The argument about the undesirability of offsetting aggregate supply shocks was made (with less moral force, I think) by George Selgin in Less Than Zero.   While I don't find George's argument for a mild deflationary trend convincing, he did convince me long ago to give up on price level stabilization because of the undesirability of using monetary disequilibrium to reverse the impact of aggregate supply shocks on the price level.

David Eagle has also provided an analysis of the risk sharing implications of price level stabilization.


This is one of the reasons shy Market Monetarists favor nominal GDP targeting rather than price level or inflation targeting.
Posted by Mayor Bill Woolsey at 9:06 AM 4 comments: 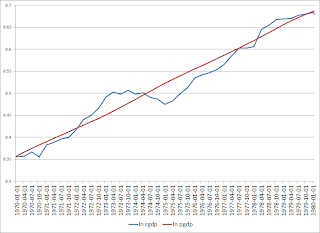 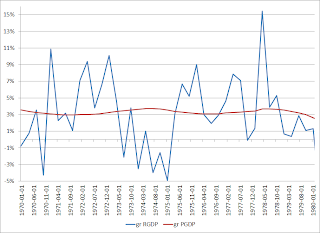 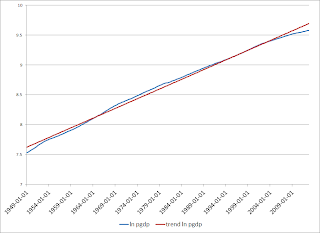 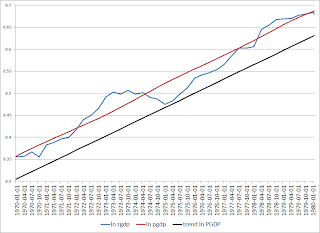 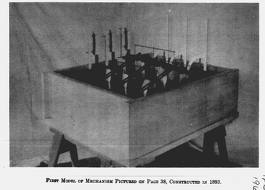 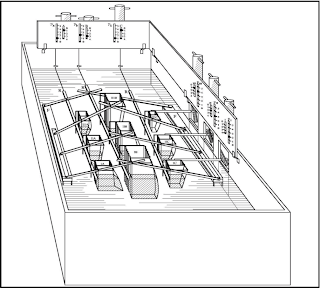 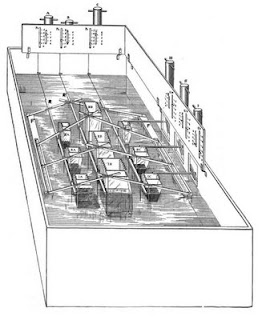 Come to think of it, Fisher's faith that the public officials at the Fed would do the right thing is similar to his notion that a legal ban on alcohol would create a nation of productive teetotalers rather than the reality of a nightmare of organized crime.
Posted by Mayor Bill Woolsey at 7:00 PM 2 comments:

Use the Force, Ben

Matthew O'Brien hits this one out of the park!

There is No Try,
Ease or Ease Not. 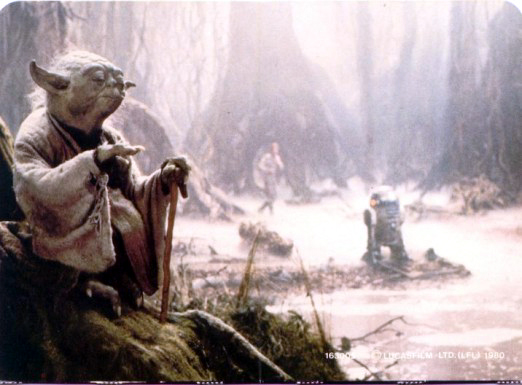 (But target the growth path of nominal GDP!)
Posted by Bill Woolsey at 4:03 PM 1 comment:

Andolfatto on NGDPLT: Beside the Point?

Anyway, supposedly young people expect their capital goods to be less productive when they are old, so they prefer to produce fewer of them and instead produce consumer goods to sell to the old people and accumulate money/bonds.  (That there is no difference between money and government bonds is a pretty serious problem for any monetary model, but I realize that doesn't phase "top tier" monetary theorists.)

The quantity of money is given, apparently, so this creates deflation. The old people get extra consumer goods, and the young people get less money per consumer good, with the prices they receive being lower.

But then, I guess the real return on capital is supposed to be negative too.  Andolfatto seems to identify the natural interest rate as the interest rate without the realization of the productivity shock.   I guess it would be the expected natural interest rate.   Because there is no growth, it is supposed to be zero.   And so,  if the shock is zero, then I guess a negative shock makes it negative absolutely. And so we are equalizing that negative return on capital with a negative across generation transfer of consumer goods using money.   Well, negative for the current young generation.  The windfall for the old folks suggest they get a positive return on their money.

From a market monetarist perspective, the quantity of money should rise. The young people want to hold more money, and so more should be issued, presumably in exchange for consumer goods. Obviously, the old people have to get the consumer goods since no young person wants them. But the government is creating all the money.

So, how does the government get the new money to old people?

Suppose the government pays extra "interest" to the old people today, expanding the quantity of money. And gets it back by paying less interest to the current young people when they are old.

The old people buy more consumer goods, the young people get more money, but earn lower interest on the money/bonds.    Given the assumption of zero interest in "normal" times, this would be positive interest for the current old folks and negative interest paid to current young people.

I guess I just don't understand. Because it seems to me that when the current young generation expects a poor return from capital goods and they switch to selling more consumer goods so they get a lower return from money too, driving down money prices, until the expected inflation rate makes the real interest rate equal to the lower expected return on capital goods, it is just creating a windfall for the current old folks.

And I don't see what this could possibly have to do with nominal GDP targeting.

Also, in this scenario, output is constant, and so constant nominal GDP is the same a constant price level. Isn't the live debate about which of those is better?

Fixed quantity of money, higher money demand, and deflation somehow being better because it prevents too much investment is beside the point.  (Doesn't this sound like the Austrian business cycle theory?)

So, how is it that a fixed quantity of money, inflation targeting, or price level targeting allows the next group of young people to be taxed more?

Since in this model output is fixed, there is nothing to share.   And, the government is the only debtor, so any benefits would go the the government/taxpayer.

It is a bit odd that output stays constant but the productivity of capital falls, but that is because the "productivity of capital" is the ability of capital goods to produce consumer goods for the old folks that own them.   It would be like the cars they purchased when young break down more than expected when they are old.   Or they buy fruit trees when young, and when they are old, low yields mean they don't eat much fruit when old.    Young people, hearing news that this will happen to them, leads them to buy fewer cars and instead accumulate money/bonds.   They get them by selling massages, or something, to the old folks today.

Well, that is my take so far.   And I think that there is no substitute for adding a bit more realism to the analysis.

Posted by Bill Woolsey at 3:59 PM No comments: