George Selgin has a post arguing that even modest deviations of nominal GDP from trend can lead to "booms."    He provides the following graph. 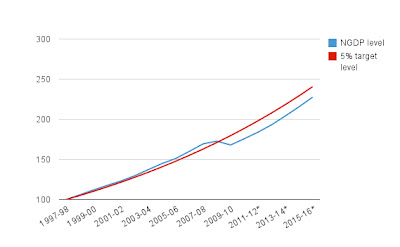 He goes on to argue that while the upward deviation beginning in 2002 and ending in 2009 appears small, it could result in significant market distortions.    Immediately, I thought that this graph looked wrong.    Here is the graph I just posted yesterday: 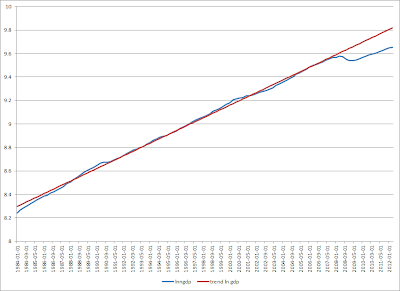 I generated this trend using the natural log of nominal GDP from first quarter 1985 to fourth quarter 2007.    It looks to me like the actual value of nominal GDP just barely kisses the trend in 2005 before its growth rate slowed.

Of course, that was the whole Great Moderation.   Here is a close up: 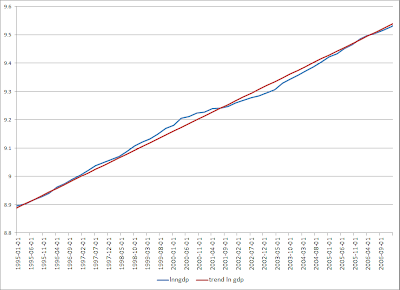 It looks about the same.    I then graphed the nominal GDP "gap," which is the difference of nominal GDP from trend. 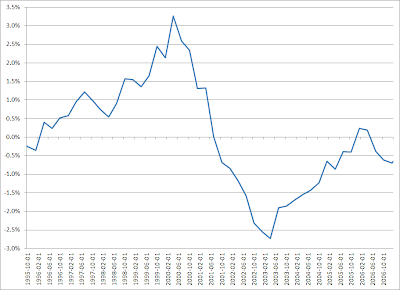 At first I assumed that Selgin must have used some different time period to generate the trend, but right there on the chart it says the growth rate is 5 percent.   Well, the trend for nominal GDP during the Great Moderation was 5.4 percent, so that explains the differences in the diagrams.

I realize that Sumner advocates a 5 percent growth path, but I don't try to understand what happened in the Great Moderation by comparing the actual trend to Sumner's preferred target.  I favor a 3 percent growth path, and so, the nominal GDP growth during the Great Moderation was far above what I consider ideal.   Still, I think shifting down to my preferred growth rate would likely create the usual disinflationary disturbance.  More to the point, I don't think that the many quarters with nominal GDP growing more than 3 percent involved an excess supply of money.

As for the theory, Selgin writes:

Such distortions can be significant even when they don’t involve exceptionally rapid growth in nominal income, because measures of nominal income, including nominal GDP, do not measure financial activity or activity at early stages of production. When interest rates are below their natural levels, spending is re-directed toward those earlier stages of production, causing total nominal spending (Fisher’s P x T) to expand more than measured nominal income (P x y). Assets prices, which are (appropriately) excluded from both the GDP deflator and the CPI, will also rise disproportionately. It is the possibility that such asset price distortions may significantly misdirect the allocation of financial and production resources that lies at the heart of the "Austrian" theory of boom and bust.

Selgin's argument would be appropriate if Market Monetarists favored targeting nominal consumption spending.   And, of course, it is on the mark as a criticism of targeting a consumer price index--which is what most central banks actually do.   But Market Monetarists favor targeting nominal GDP, and it includes both the prices and quantities of goods at early stages of production.    Those goods of the "higher order" that last more than one year count as final output as much as do consumer goods and services.   Since capital goods that last a very long time and provide services in the distant future are especially "early" in the production process, they are measured quite well.   (Single family homes, for instance.)

But this is a mistake.  Intermediate goods show up as part of inventories.   When a steel firm produces steel and hasn't sold it yet, the dollar value of the steel is part of nominal GDP.   If a car manufacturer purchases the steel, and has yet to produce any cars with it, then the dollar value of the steel counts as nominal GDP.   (Not twice, of course, but only once.)   If the car company makes engines with it, the steel is included in the value of the engines, even if the engines are left sitting about waiting to be assembled into cars.

Now, inventories are not included in Final Sales of Domestic Product or Final Sales to Domestic Purchasers.   That is one reason why those are not the proper measures of spending on output.

None of these measures, of course, measure the prices or quantities of financial assets.    However, if the concern is distortions in the allocation of resources, the production of inappropriate specific capital goods, and the pattern of employment, it is unclear that financial assets (or raw land or other nonreproducible real assets) matter.

Missing in both perspectives is any attention to the way in which interest rate movements redirect demand from certain markets to others.

Now, I believe that an excess supply of money typically reduces the market interest rate below the natural interest rate in a credit money system.    And I also think that lower interest rates raise the demands for goods with a higher interest elasticity of demand more than other goods.   But that isn't a "redirection" of demand.   The demand for other goods and services, with smaller interest elasticity of demands, just have smaller increases in demand.    Of course, there is a distortion in the composition of demand, but an excess supply of money and a market interest rate below the natural rate doesn't cause demand to fall for some goods as would be the situation with a tax and subsidy scheme.

Market Monetarists have been especially interested in situations where nominal GDP is below trend (or target) and an expansionary monetary policy is aimed at getting nominal GDP back up to the target growth path.   In those situations, the point of the monetary policy is to create a nominal "income effect."   Market Monetarists insist that nominal and real interest rates can be expected to return to equilibrium once this is accomplished, and so, can immediately begin to rise due to that expectation.

In 2003, nominal GDP was far below trend, and an expansionary monetary policy could return it to trend.  It barely made it back to trend.   Of course, the Fed wasn't targeting nominal GDP at all, but rather inflation and the output gap.   And they were doing this by making periodic adjustments in a policy interest rate.   Such a policy almost seems tailor-made (or is it Taylor-made) to create the problems that concern Selgin.

If instead, we had a central bank that was targeting nominal GDP, it is inevitable that mistakes would be made.   An excess supply of money could develop and the market rate could be pushed below the natural rate.   Only later would spending on output (including capital goods, partially finished goods, and inventories of intermediate goods) begin to rise above target.     Would those firms that faced what turns out to be an sustainable rapid increase in demand commission specific capital goods (say construct buildings) and hire workers?   Certainly that seems possible.

However, to the degree this is caused by "low interest rates," these interest rates must be expected to persist into the future.   Too much Austrian analysis just assumes that everyone takes  any change in the policy interest rate as permanent and uses it as a reasonable basis for making long range plans.     Isn't the most likely scenario one in which both the monetary authority and entrepreneurs make the same error?

Market Monetarists, like Sumner and I, who are interested in index futures targeting, have in mind a system where monetary policy is generated by the market.   If those trading the index futures, bond investors, and entrepreneurs all think that the natural interest rate has fallen, then it is quite possible that unsustainable investments will be made before excessive growth in spending on output shows that no, the natural interest rate was not as low as everyone thought.   But would such errors be especially the fault of those trading the index futures?   Wouldn't those holding long term bonds also be a  fault?   And how about entrepreneurs that initiate projects that are only feasible if interest rates remain low?

The central bank lowers the interest rate, entrepreneurs take that to be permanent, and make bad investments.   Even with inflation/output gap targeting, it seems like the entrepreneurs should accept responsibility for figuring out that an excessively low policy rate now will be offset by a higher rate in the future.   And if they think the policy  rate is not excessively low, isn't the problem that they have a mistaken estimate of the natural interest rate now and in the future?   (Just think about scenarios where the natural interest rate falls now and rises again later.  Entrepreneurship is not easy.)

Anyway, I think there was a housing bubble.   The list of things that increased the demand for homes was legion.   The tiny overshoot of nominal GDP in 2006 seems like a pretty small problem in comparison.