Some Aggregate Supply and Demand Diagrams

Scott Sumner has been surprised by those economists who are surprised by slower wage growth along with faster increases in employment.   He pointed out that if the supply of labor increases, then wages go down while employment increases.   He says that the puzzled economists seem to be just looking at a supply curve, so that a higher quantity of labor must mean a higher wage rate.

Sumner's point is that the slower wage growth and expanding employment is related to the simultaneous deflation and recovery of real output that is part of the basic textbook analysis of aggregate supply and demand.   It is the adjustment of the long run.   That Market  Monetarists typically advocate that Aggregate Demand shift back to the right, so that prices and output both recover doesn't mean that we forget what happens if Aggregate Demand remains stable.

Sumner then point out that the more modern approach replaces the price level with the inflation rate and the the levels of real output and potential output with the growth rates.   This approach is used in Cowen and Tabarrok's text.    Unfortunately, that approach is unable to show problems with levels. 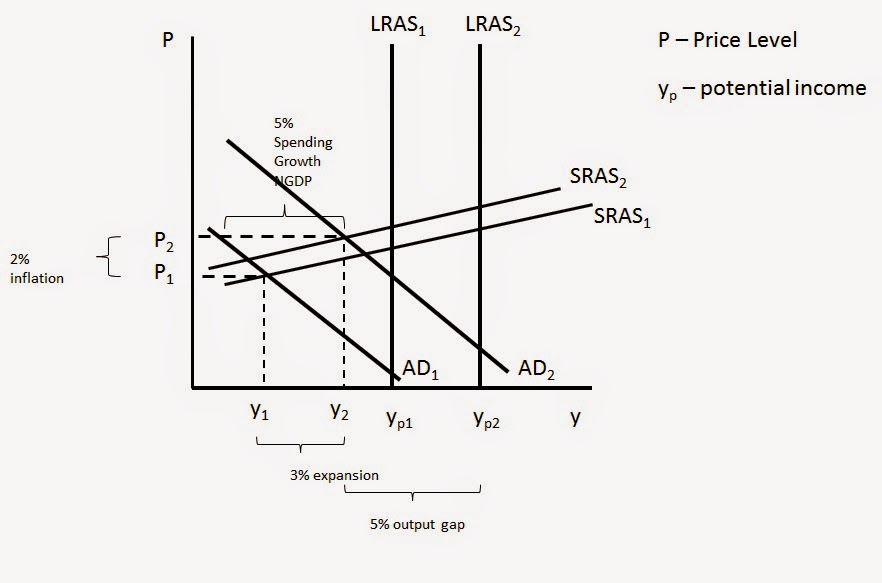 Pretty complicated, I know.   The shift in LRAS is supposed to be 3%.    Aggregate demand is growing 5%, inflation is on target at 2%, and real output is growing 3%.   But potential output is growing at 3% as well, so the output gap remains constant.    In this diagram, it is 5%, but that is an assumed starting place rather than an implication of the arithmetic.

Now, the natural rate hypothesis says that this cannot be a true equilibrium.  The Short Run Aggregate Supply curve cannot continue to shift to the left enough to keep inflation at 2%.   Sumner's theory, which I think is correct, is that wages will grow more slowly which will cause the SRAS to shift a smaller amount "up."   The result will be lower inflation.

However, it seems to me that recent evidence suggests that the better anchored inflation expectations, the less effective this process.   Ideally, in this example, the short run aggregate supply will shift to the right enough to cross the second Aggregate Demand curve where it intersects the second Long Run Aggregate Supply curve.   That would imply substantial deflation of prices.   Strongly anchored expectations of 2 percent inflation makes this more difficult to accomplish.   If the Fed convinces everyone that everybody else will raise their prices 2% next period, cutting them substantially, (3 percent in this example) would not be optimal.

Here is a diagram that attempts to describe something like the status quo.   Notice that inflation is a bit lower than 2%, real output is only growing 3%, but the output gap is closing because potential output is growing more slowly. 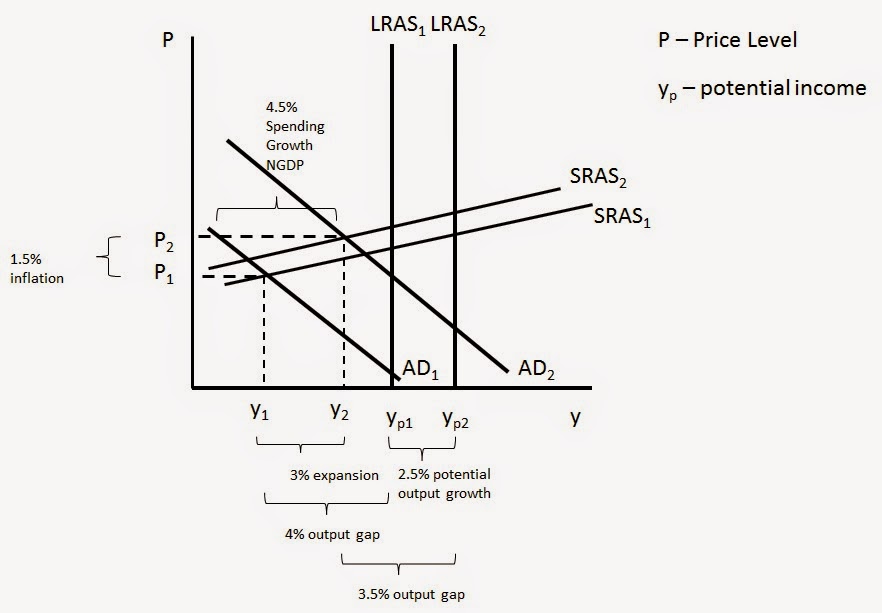 If the SRAS curve shifted less to the left, or even shifted to the right a bit, inflation would be even lower, real output would grow more rapidly, and the output gap would shrink more rapidly.   A rapid recovery with continued slow, (4.5% in the example) growth in Aggregate Demand would require a large rightward shift in the Short Run Aggregate Supply curve.   To do it all at once would require 6 percent real growth.   With 4.5 percent nominal income growth, that implies 1.5% deflation.