A Video about "The Broken Window Fallacy"

The fundamental principle of macroeconomics is the same as the fundamental principle of microeconomics--scarcity.
A general glut, an output gap, and involuntary unemployment are interesting and important because of scarcity. Many macroeconomic fallacies result from the false notion that the key economic issue is finding things for people to do rather than effectively allocating resources to produce what people want most. The disruptions caused by monetary disequilibrium are problems because they interfere with the market processes that embody the most effective social response to scarcity.
Frederic Bastiat did a great job in exploding fallacies and explaining how scarcity is really the fundamental economic issue.
The video comes from the Atlas Foundation.
In Charleston, South Carolina, we have the Bastiat Society. I strongly recommend the monthly meetings. Lately, the meetings have been at the Harbor Club.
Posted by Bill Woolsey at 9:15 AM 7 comments:

Final Sales for Domestic Product for the fourth quarter of 2009 was again revised downward. The first estimate was $14,503 billion. It was revised downward to $14,482 billion. The final figure is $14,477 billion. It grew at an annual rate of only 2.2 percent since the third quarter of 2009.
It is 10.5 percent below the long run 5.4 percent growth path. It is 7.5 percent below the modified 3 percent growth path I favor.
My preferred target for the first quarter of 2011 is unchanged by the revisions. It remains $16,202 billion. (The second quarter target is $16,324 billion.)
Between the fourth quarter of 2009 and the first quarter of 2011, nominal expenditure needs to increase by 11.2 percent, which is a 9 percent annual rate of growth. 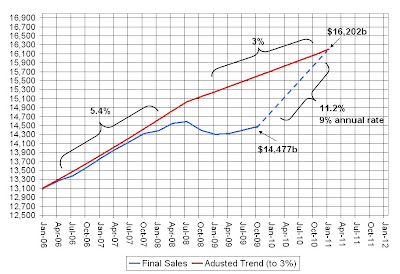 Many economists blame the Great Recession on a credit boom instigated by the Federal Reserve in 2001-2004. John Taylor blames a failure by the Fed to follow the rule that bears his name. The Fed's target for the federal funds rate was left too low for too long. San Francisco Fed President Janet Yellen claims that higher interest rates would have slowed housing appreciation and restrained excessive credit creation in securitized markets.
"Austrian" economists sometimes take comfort in these arguments, seeing them as at least partial acceptance of their long standing view about recessions being the aftermath of a credit boom generated by a central bank. In their view, the expansion of the quantity of money by the Fed caused interest rates to fall too low, which resulted in a vast expansion in spending on new single family homes. Rising prices and production in this sector were unsustainable, and resulted in the recession. David Beckworth, of Macro and Other Market Musings, appears to take this approach.
That interest rates were remarkably low during part of the "naughties" is certainly true. 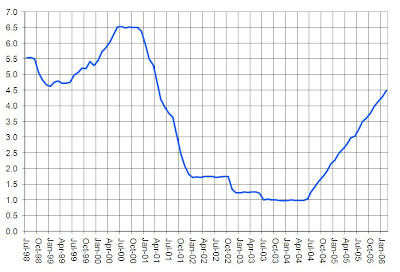 During 2001, the Fed cut the federal funds rate 4.75 percentage points, from 6.5 percent in late 2000 to 1.75 percent in early 2002. After a pause, the reductions continued, hitting a low of 1 percent in mid 2003. The remarkably low level of the federal funds rate was continued until mid-2004. At that point, interest rates began a long series of regular increases.
However, showing that some price is lower (or higher) than usual, hardly proves that it is too low or too high. The role of prices in a market economy is to coordinate the decisions of market participants and changing conditions may require large changes in prices. So, were interest rates "too low" from late 2000 until sometime in 2005 or after?
I believe that the least bad policy for the Fed is to keep nominal expenditure on a slow, steady growth path. Ideally, I favor a 3 percent growth path, which is consistent with a stable price level on average.
However, the Fed aimed at 2 percent inflation, which implies more rapid growth in nominal expenditure. Looking at the actual growth path of nominal expenditure during the Great Moderation (dated from first quarter 1984 until the third quarter of 2008,) its trend growth rate was 5.4 percent. However, there were substantial deviations of nominal expenditures around that growth path. The diagram below shows Final Sales of Domestic Product from 1984 through the end of 2009. 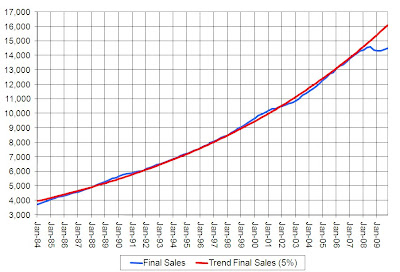 The Great Moderation can best be characterized by nominal expenditure remaining very close to its trend growth path. Of course, the most striking aspect of the diagram is the catastrophic decrease in nominal expediture in the fourth quarter of 2008. While the Great Recession is officially dated as beginning at the end of 2007, the mild reduction in spending growth was "normal" for the Great Moderation until disaster struck a year later.
Other milder deviations include nominal expenditure being above its trend growth path in the late eighties and the late nineties. Of course, the deviation most relevant is during the supposed credit boom--nominal Final Sales of Domestic Product was below its trend growth path during that period. The following diagram shows Final Sales of Domestic Product from 1998 until 2006. 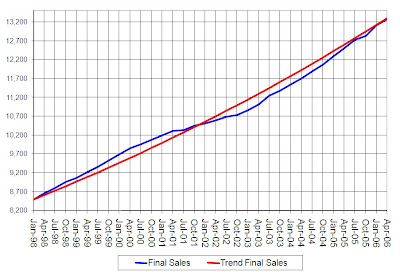 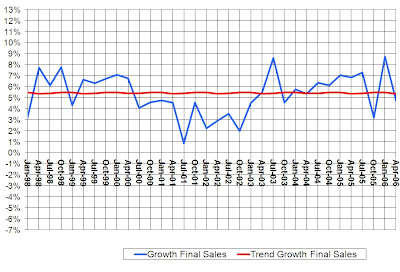 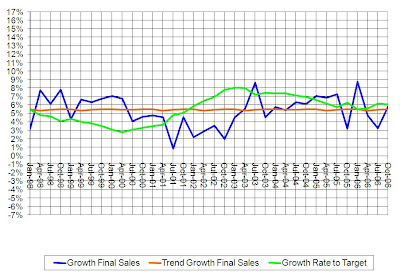 Posted by Bill Woolsey at 8:29 PM No comments: