The GDP report came out, and as usual, the headline is the real GDP figure. Real GDP increased at a 3.2 percent annual rate in the first quarter of 2010.
However, I always scroll down to see what has happened to total cash expenditures. My preferred measure is Final Sales of Domestic Product. The value of the first quarter 2010 was $14,568 billion. The annual rate of increase was 2.51 percent.
The good news is that cash expenditures have nearly returned to their peak value before the recession of $14,583 billion in the 3rd quarter of 2008. The shortfall is less than .1 percent.
On the other hand, if cash expenditures had continued on its 5 percent trend growth path of the Great Moderation, it would now be $16,311 billion. The current level is 11.3 percent below trend.
Even with a modified growth path of 3 percent, changing at the peak in the third quarter of 2008, the target level would be $15,723 billion, and so the current value is 7.63 percent too low.
Worse, a 2.5 percent growth rate will never return to a higher 3 percent growth path, much less a 5 percent one. Surely, it is better for cash expenditures to rise rather than fall, but the current growth rate remains too low.
I believe that the Fed should commit to returning Final Sales of Domestic Product to the 3 percent modified growth path next year. It is now the second quarter of 2010, and so, one year from now, in the second quarter of 2011, cash expenditures should be $16,324 billion. That would be an increase of 12 percent from last quarter, or averaging a 9.6 percent annual growth rate for the current and next 3 quarters.
Posted by Bill Woolsey at 9:14 PM 2 comments:

Russ Roberts on the Crisis

Russ Roberts of Cafe Hayek has an excellent paper on the Crisis--Gambling with Other People's Money.
Roberts blames the crisis on a pattern of creditor bailouts by government. The government has developed a policy of making sure that people who lend money don't suffer losses. On its face, that is absurd. Banks take losses from bad loans all the time. Robert's point, however, is that the households and businesses that lend to financial firms are shielded from these losses. He emphasizes that government policies are aimed at limiting the losses of any financial firm to stockholders of that particular firm.
For commercial banking, his account rings very true. Deposit insurance explicitly protects insured depositors from loss. Insured depositors have no reason to worry about the risks taken by their banks. Losses are borne first by the bank's stockholders and then by uninsured depositors and other creditors. However, FDIC has made it a habit to protect all of the uninsured depositors and other creditors from loss as well by using the "purchase and assumption" method of resolution for insolvent banks. FDIC guarantees enough of the bad assets of a failed institution, so that some larger, hopefully sound bank, will then take the remaining assets of the failed bank as well as take responsibility for all of its liabilities.
Roberts emphasizes that the GSEs, Freddie Mac and Fanny Mae, borrowed by selling bonds that had an implicit federal government guarantee. As expected, the lenders were protected from loss when Freddie Mac and Fanny Mae became insolvent. Harder to explain was lending to stand-alone investment banks, like Goldman Sachs, Morgan Stanley, Bear Sterns, and Lehman Brothers. None of these borrowed using insured deposits. There was no implicit government guarantee... oh wait. The government bailed out all of the creditors of these institutions except for Lehman Brothers.
Roberts builds a convincing argument that bailing out creditors leads to perverse incentives. However, I disagree with his claim:

The punishment of equity holders is usually thought to reduce the moral hazard created by the rescue of creditors. But it does not. It merely masks the role of creditor rescues in creating perverse incentives for risk taking.

I think that making equity holders take losses does reduce the moral hazard created by bailouts. For example, the initial TARP proposal was for the federal government to buy "toxic assets" from commercial and investment banks. This would bailout the banks for making bad loans, and so, the equity holders as well.
Fortunately, that plan was dropped. Instead, the TARP money was used to purchase stock in the banks. This resulted in some dilution of ownership, but it still involved bailing out stockholders.
If the various commercial and investment banks had been given the more standard FDIC treatment, all creditors would have been made good, but the stockholders would have been left with nothing. Bush and Paulson made moral hazard worse.
Robert's point, of course, is that even if the stockholders had lost everything and only the creditors were covered, there is still serious moral hazard. Before deposit insurance, banks needed to maintain higher capital ratios to attract depositors. The way to make sure that depositors or those holding the deposit-like short term commercial paper of investment banks insist on high capital ratios is for them to lose some money in banks that fail.
I think Roberts fails to emphasize the "bubble" element in the housing market. While he discussed a variety of government policies that were aimed at raising housing demand and so the equilibrium prices of homes, the "bubble" is the mistaken projection of past price increases into the future. In my view, this is what leads to the overshooting and an inevitable collapse.
If we think about "greater fool" investors, who understand that past price trends should not be projected into the future, but who believe that there are some "fools" who do and that profits can be made at their expense, the resulting "game" is very much like poker. This is especially true when the goal is to fleece not only the fools, but also others seeking to sell out to greater fools. And it is in that poker game, that Robert's point about gambling with other people's money rings true.
I strongly disagree with part of Robert's conclusion:

Be aware that the Fed is certainly part of the problem and may not be part of the solution. The Fed created the artificially low interest rates that helped inflate the housing bubble. The Fed then raised interest rates too quickly with disastrous effects for the adjustable-rate mortgages encouraged by their low-interest- rate policy. Monetary policy should not be left to any self-proclaimed or publicly anointed maestro. Following an automatic money growth rule or the Taylor rule would have avoided much of the pain. Somebody needs to hold the Fed accountable for funding exuberance.

I am not sure that the Fed's excessively low interest rates were part of the problem. If the natural interest rate falls and the Fed properly allows the market interest rate to fall with it, then housing prices will rise.
Worse, following "the Taylor rule" or anything like it is a mistake. Interest rates should depend on supply and demand, not manipulations of the quantity of money by a central bank based upon observations of past inflation and estimates of an output gap. Further, a money growth rule is equally bad. Money is an economic good, and its quantity should adjust to the demand to hold it.
Naturally, I favor a target for a slow steady growth path of aggregate cash expenditures. To the degree possible, market forces should be allowed to freely adjust both interest rates and the quantity of money consistent with maintaining that stable macroeconomic background.
In conclusion, I must ask, what "crisis" do we mean. I believe that the Fed's policy of interest rate targeting was responsible for the real crisis that has left total cash expenditures about 10 percent below their long run growth path. I won't deny that a long standing policy of creditor bailouts was responsible for the solvency problems of leading Wall Street investment banks, and many commercial banks as well. The degree of malinvestment in housing, as well as the inevitable disruption to production when insolvent financial institutions are reorganized might also be laid at the door of this policy of creditor bailouts. But these things pale against the failure of the Federal Reserve to do its job--keeping aggregate cash expenditures on a stable growth path.
Posted by Bill Woolsey at 6:56 AM 8 comments:

One problem with "Austrian" Macroeconomic thinking is excessive focus on scenarios where the natural interest rate, and so, the supply of saving and demand for investment, is given. The "classic" scenario is where the demand to hold money is assumed given as well, and then an increase in the quantity of money pushes the market interest rate below the natural interest rate.
Suppose instead that investment demand increases because of a speculative bubble in housing. The "cause" is the projection of past price increases into the future. People invest in order to profit from those expected price increases. If there are people who will be willing to pay high prices for the houses in the future because they want to live in them, then there is nothing irrational about this investment plan. It is only a speculative bubble if the reason people are paying higher prices for the homes is that they plan to sell them to someone else at a still higher price, but that person will only pay that price because they plan to sell to still someone else at a yet higher price. It is a speculative bubble if there is no one at the end who is willing to pay the high price in order to live in the house.
Suppose that instead of this kind of bubble behavior, people are investing in houses now because radio messages are received from outer space. Alien settlers are on their way with ships full of great consumer goods. They will exchange those for houses when they arrive. Assuming the messages are true, then purchasing a home is a great investment project. It will generate large amounts of future output. (And, when the messages turn out to be a fraud, the result will be somewhat like the bursting of the speculative bubble.) 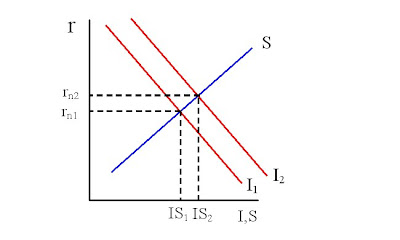 Tyler Cowen
Posted by Bill Woolsey at 7:09 AM No comments:

Malinvestment and the Liquidity Effect

Where Did Mises Go Wrong?