Is it better to target nominal GDP (which is just GDP) or Final Sales of Domestic Product?
Return to the scenario from the last post, where in period one, orchards produce 100 apples and they produce 103 in period two.   The price is $2.   The target for money expenditures is $200 in period one and $206 in period 2.   Either Final Sales or GDP is used to measure money expenditures on current output.
Suppose there is an excess supply of money.     The monetary authority expands the quantity of money and there has been no increase in the demand to hold money.    Households spend their excess money balances on apples.   They purchase 102 apples, spending $204.     Suppose the orchards were holding inventories of at least 2 apples, and so they sell those 2 apples out of inventory.
If Final Sales is used to measurer spending on output, then the monetary authority misses the target.   Final Sales will be $204, $4 above target.    If, on the other hand, GDP is used to measure spending, then the unplanned inventory disinvestment of $4 is taken from the household spending on apples of $204 so that GDP would be $200.  It remains on target.
With Final Sales targeting the excess supply of money created by  the monetary authority is signaled by its failure to hit the target.   With index futures targeting,  those speculators who had gone long on the contract would profit under Final Sales targeting, being rewarded for their signal that an excess supply of money had developed.   Those who had gone short, wrongly signaling that there would be an excess demand for money, would lose.   With GDP targeting, the target is hit, and there would be no profits or losses.
Now consider period 2.   The orchard can produce 103 apples.   Assuming the price of apples is $2, then that is $206.   Further, assume the orchard wants to replenish its inventory, adding 2 apples.      With final sales targeting, spending by the households on apples must be $206.    While the orchard can produce 103 apples, it will only choose to sell 101 to rebuild its inventory.     Either the orchard will sell those apples and not replenish of its inventory, or there will be a shortage of apples, or the assumption that the price remains $2 cannot be maintained.   The most realistic scenario is that the price of apples will rise.   There will be inflation, even if Final Sales remain on target.
With GDP targeting, the inventory investment of $4 plus spending by households on apples must add up to $206.    This requires that the households spend $202 on apples.   That happens to be exactly equal to what they spent in period 1, but that is just an artifact of the particular example.    Assuming the baseline is that they would have spent an amount equal to their income, $206, the monetary authority needs to follow some “contractionary” policy to motivate them to spend $4 less than they otherwise would.   This, of course, is exactly equal to the planned inventory investment.
Like in the deflationary scenario, total spending on output (including inventory investment) remains equal to the productive capacity of the economy in both periods with GDP targeting.    With Final Sales, targeting, an excess supply of money that results in unplanned inventory disinvestment in the first period results in an excess demand for goods when the inventories are replenished.     In other words, there will be some inflation between the first and second period.
While it isn’t exactly clear what would be the cost of having low inventories between the first and second periods,  presumably there is some cost and the initial excess supply of money imposed those costs on firms as an externality.    The monetary authority really should try to avoid excess supplies of money.   With index futures convertibility, those speculators who recognize this problem should be rewarded at the expense of those who were completely wrong and expected an excess demand for money.
On the other hand, the GDP target does a much better job in avoiding readjustment costs in the second period.   Just as inventories provide a buffer  to balacne production and consumption in particular markets, allowing the economy as a whole to use them is a benefit of GDP targeting relative to Final Sales targeting.
A hybrid approach in which unplanned inventory investment (such as in the first period) doesn’t count towards the target for money expenditures (representing a failure to maintain monetary equilibrium) but planned inventory investment does count, like the planned replenishing of inventories in the second period, would appear to be superior to both GDP and Final Sales targeting.    However, in this inflationary scenario, it still seems that GDP targeting is better than Final Sales targeting.    Production remains at capacity with GDP targeting and there is no inflationary adjustment in the second period.
Oddly enough, if the assumption is a “bolt out of the blue” increase in the quantity of money,  it would seem that excess supply of money in the first period is being offset by an excess demand for money in the second period.    Assuming a credit money system, the “bolt from the blue” would be excessively low interest rates in the first period, with excessively high interest rates in the second period.     Could this generate some Austrian-style malinvestment?    While more study is appropriate, the balance of the evidence still looks like GDP targeting is the least bad option for now.
Posted by Mayor Bill Woolsey at 10:10 AM 3 comments:

More on Final Sales and GDP: Sumner is Right.

Dreaming about new macroeconomic measures is nice.   But until such a measure is created, I have to conclude the GDP (nominal ) is the least bad option.    Since index futures targeting is unlikely to be implemented soon, and so any target for the Fed will be more like a suggestion, the Fed can still be criticized for a slowdown in final sales and unplanned inventory investment.


In conclusion, Sumner is right.
Posted by Mayor Bill Woolsey at 7:43 AM 2 comments:

For several years I have advocated the use of Final Sales of Domestic Product to measure money expenditures. This is as opposed to GDP. (Scott Sumner is always calling it NGDP, which is a bit redundant. RGDP is GDP corrected for changes in the price level.) The difference between the two measures is changes in inventories. Perhaps remembering early explanations of Keynesian economics, where unplanned inventory investment plays a key role in keeping expenditure equal to output, it was just those changes in inventories that I thought should not be included in a proper measure of monetary expenditure. Counting goods produced and not sold as having been purchased by the producer hardly counts.

Perhaps keeping the focus on the future--the target should be for Final Sales for Domestic Product in a year, makes it so that every part of inventory changes can be ignored. However, more study is needed and I am more and more thinking that the best measure doesn't yet exist.
Posted by Mayor Bill Woolsey at 8:10 AM 7 comments:

Bob Murphy asked me to explain the Fed's new accounting rules about remitting earnings to the Treasury. I did an internet search and it appears that the conspiracy theorists see something nefarious. I was doubtful.

The general explanation of the policy is a bit difficult to decipher.


Effective January 1, 2011, as a result of the accounting policy change, on a daily basis each Federal Reserve Bank will adjust the balance in its surplus account to equate surplus with capital paid-in and, in addition, will adjust its liability for the distribution of residual earnings to the U.S. Treasury. Previously these adjustments were made only at year-end. 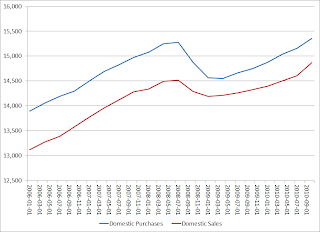 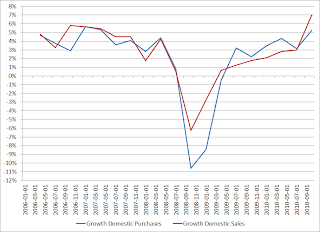 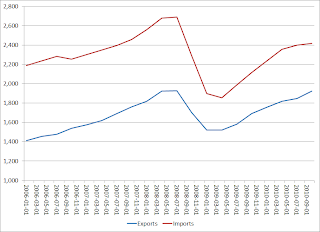 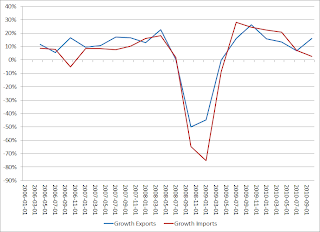 Still, the goal should be for growth in money expenditures on currently produced U.S. output to remain on a predictable path.    I favor adjusting the growth path from that of the Great Moderation, but with the current level being so low compared to the Great Moderation (12.5 percent too low,) some reflation is desirable. Until some new measure of money expenditures is developed, perhaps including planned inventory investment and excluding inventories of imported goods and the value added by imported goods and services to  inventories, I am still calling for $16.4 trillion of Final Sales of Domestic Product in the fourth quarter of 2011.  Yes, 9 percent more than in the fourth quarter of 2010.
Posted by Mayor Bill Woolsey at 11:17 AM 1 comment: