Woolsey is trying to take the Recalculation story and rework it into the MV= PY framework. While the economy is Recalculating, potential GDP goes down. Accordingly, if the monetary authority maintains a high MV, we will get inflation and not more real output.

I think that is a pretty fair description of what happened in the 1970's. But right now, I am saying that the Fed cannot raise MV. It raises M and V goes down. If the Fed really worked at it for a long period of time, I am sure that they could bring back inflation, like in the 1970's. However, I do not think that they can cure the Recalculation problem by raising nominal expenditure. If anything, I think more inflation would make the Recalculation problem even harder for the economy to solve. 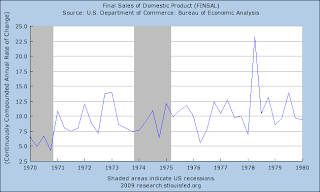 This chart shows the compounded annual growth rate of total final sales between first quarter 1970 and first quarter 1980. It was well above my preferred target of 3% each and every quarter. It soon skyrockets beyond Sumner's preferred 5% growth rate, heading for double digits by the end of the decade. Note the 23% annual growth rate near the end of the decade. While there may have been a slow down in productivity growth during the period, the high and increasing growth rates of nominal expenditures should have been expected to cause high and rising inflation.

Kling's argument that "right now" the Fed cannot increase nominal expenditure, because any increase in M leads to a fall in V is the same thing as arguing that the demand for money--the amount of money households and firms want to hold--will passively increase to match increases in the quantity of money.

To some degree, this is consistent with the long and variable lags that was a tenant of orthodox monetarism. The quantity of money increases. If the demand for money is unchanged, there is an excess supply of money. Excess money balances will be spent. However, it is impractical make large changes in spending instantly. And so, spending increases over time, gradually reducing actual money balances to their desired levels.

As for the liquidity trap, it is almost certainly an artifact of "conventional" monetary policy, particularly targeting interest rates, but also from limiting open market operations to Treasury bills. A commitment to adjust the quantity of money however much is needed to target nominal income implies a willingness to purchase longer term government bonds or even foreign bonds or private securities, if purchase of the entire outstanding stock of T-bills fails to do the job.

Finally, to the degree a "Recalculation" is a reallocation of resources, stable growth of nominal expenditure provides an excellent environment for readjustments. Prices and profits rise in the sectors that need to expand, clearly signalling that production should rise. Prices and profits fall in the shrinking sectors, signaling that they should shrink.