Did Low Interest Rates in 2003 Cause the Crisis?

Cato has a new policy analysis by Jagadeesh Gokhale and Peter Van Doren. Among other things, they argue that a tighter Fed policy in the early 2000s would not have been a sensible approach to avoid the housing bubble and current financial crisis. David Beckworth disagrees in a recent post on Macro and other Market Musings. He cites both Larry White and John Taylor, arguing that by keeping the federal funds rate too low for too long in 2003 and 2004, the Fed planted the seeds of the current crisis.

By today's .25% standard, a federal funds rate of 1% doesn't seem shockingly low, but perhaps it was too low. 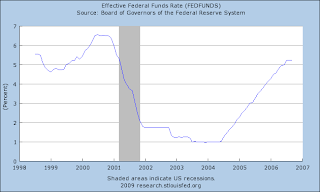 I believe that the Fed should keep nominal expenditures--total final sales of domestic product--on a slow steady growth path. I prefer a 3% growth path. With a 3% trend growth rate in productive capacity, that should result in a stable price level on average. However, the Fed has preferred an inflation rate of close to 2%, which implies a 5% growth rate of nominal expenditure. How have they performed? 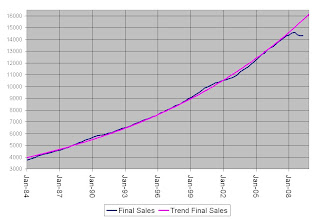 Up until 2008, the big picture looks good. I suppose that is why it was called the great moderation. 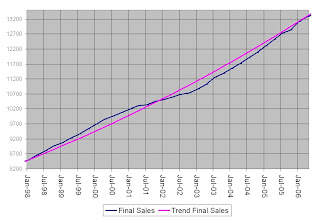 I don't favor targeting any interest rate, however, it is certainly possible that a more rapid growth rate of the quantity of money could result in lower interest rates. The Fed would be purchasing larger quantities of something, presumably T-bills. Simple supply and demand analysis suggests higher T-bill prices and lower T-bill yields. On the other hand, as Scott Sumner often points out, current nominal interest rates depend on expected inflation and current real interest rates depend on expected real output. What would have happened to market interest rates if there had been a commitment to adjusting the quantity of money enough to keep nominal expenditure on target? We will never know.
Posted by Bill Woolsey at 9:51 PM