What was up with Japan's "lost decade?" Will the U.S. suffer a similar fate?

The monetarists look at some measure of the quantity of money. The neo-Keynesians look at expected inflation and short term interest rates. And what about monetary disequilibriumites? (O.K. As bad as quasi-monetarist sounds, perhaps it is the least bad option.)
I date the "Great Moderation" from 1984 to the third quarter of 2008. I measure money expenditures using Final Sales of Domestic Product. For Japan, I am instead using GDP (which is nominal GDP. Later, I will try to construct Final Sales of Domestic Product for Japan.)
From 1984 to 1990, money expenditures in Japan remained very close to a growth path that increased at a 6 percent annual rate. From the perspective of a "quasi-monetarist," there was a regime change at that time, and a shift to a much lower .12 percent growth path. 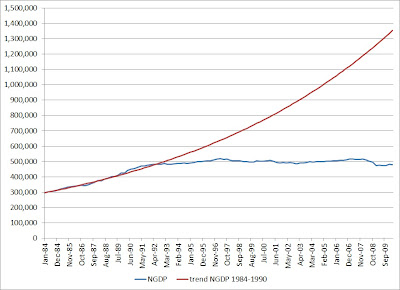 There were substantial fluctuations around that trend, rising to as much as 6 percent above trend in 1997 and 3 percent below trend in 2003. 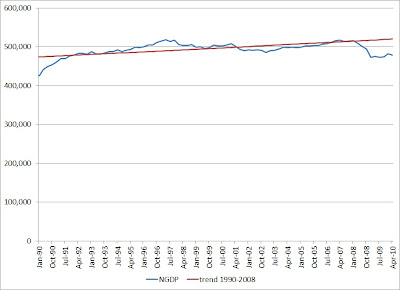 In 2008, the "Great Recession" hit early in Japan, with money expenditures shrinking at a 5 percent annual rate in the second quarter, and then continuing to shrink at that rate until the first quarter of 2009, when they dropped at the remarkable 18 percent annual rate.
Money expenditures remain about 8 percent below the growth path of 1990-2008. (If you look at the 6 percent growth path from early in the Great Moderation, money expentures are 65 percent below that trend. )
Posted by Bill Woolsey at 8:08 AM