If money expenditures had continued on its trend growth path from 1984 to the end of 2007, it would currently be $17,013 billion.    The current value remains 12.43 percent below trend.   However, this is the first quarter since second quarter 2007 that the gap from trend actually decreased  Unfortunately, for it to return to trend by the fourth quarter of 2011, it would need to grow 20 percent from the fourth quarter of 2010.    While 7 percent growth seems quite fast, at that rate, it would take nearly a decade for money expenditures to return to trend.

The chart below shows the trend of the Great Moderation in red and actual money expenditures in blue.   The dashed line is the 20 percent growth necessary to return to trend in one year. 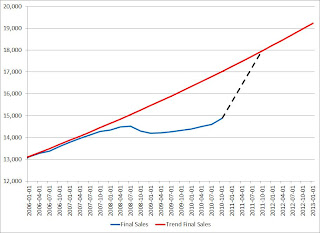 I favor adjusting the target for money expenditures to a three percent growth path starting at the beginning of the recession at the end of 2007.    This would allow for a substantial recovery of money expenditures, while moving to a new growth path consistent price level stability in the long run (at least if the productive capacity of the economy returns to growing 3 percent.)    The target for the adjusted growth path is now $15,809 billion.   The current value of Final Sales of Domestic Product is 6 percent below that target.    In order to return to target within a year, it would need to grow 9.6 percent. (from fourth quarter 2010 to fourth quarter 2011.)   If the current 7 percent growth rate continued, it would reach the adjusted trend by the second quarter of 2012.    Then, to stay on the growth path, the growth rate would need to slow to 3 percent.
The chart below shows the adjusted growth path in red.   The first portion shows the 5 percent growth rate of the Great Moderation and then slows to 3 percent in the fourth quarter of 2007.   Final Sales of Domestic Product is shown in blue.   The dashed line shows the 9.6 percent growth that would be needed to return money expenditures to target. 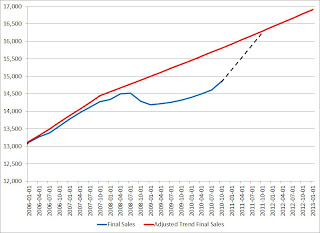 The other good news is that inflation, as measured by the GDP chain-type price index, showed an inflation rate of less than 1/3 of a percent.    Growing expenditures on output and slow increases in prices should result in rapid increases in real output.   While the real GDP figures showed much slower growth, this means that inventories were being depleted.    In my view, getting the amount that firms can sell (in aggregate) to a predictable growth path is the goal, and that should result in fewer surprises, where sales outstrip production or vice versa.
The low inflation rate implies that the price level is even further below its 2 percent growth path from the Great Moderation.    The current gap is 2.75 percent.    In my view, 2 percent inflation is 2 percent too high, which is why I favor a shift from a 5 percent to a 3 percent growth path for money expenditures.   While there is reason to believe that 9 percent growth of money expenditures over the next year, or 7 percent over the next 18 months, would raise inflation somewhat, the long run goal should be a stable trend for the price level.   Last quarter's estimate is a good start.
Posted by Mayor Bill Woolsey at 5:39 PM