When Ronald Reagan was President and Paul Volcker was chairman of the Federal Reserve, monetary policy generated nominal GDP growth at a 9 percent annual rate for 1983 and 1984. The growth rates for total spending on output for those eight quarters were:

The increase in money expenditures on final goods and services for those two years was nearly 20 percent. By the end of the Reagan administration, the new Chairman of the Federal Reserve, Alan Greenspan, had started the U.S. on the 5.3% growth path of nominal GDP that characterized the Great Moderation.

Suppose that President Obama Chairman Bernanke would make a similar commitment for monetary policy, to raise nominal GDP 19 percent over two years, an annual growth rate of 9 percent, and then a 5 percent growth path thereafter. The key element of the policy would be a target for nominal GDP of $17,912 billion for the second quarter of 2013, and then $18,136 billion for the third quarter, and so on, increasing at an annual rate of 5 percent each quarter. 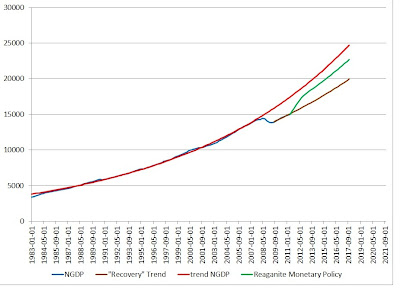 The most important potential benefit would be to generate the sort of "V shaped" recovery in real output and employment that was generated in 1983 and 1984 by Reagan and Paul Volcker. The production of goods and services grew at a 6 percent annual rate for those two years, rising more than 12 percent.

What is the risk? The risk is inflation.

To a large degree, the "inflation" generated by a monetary policy that raises the target for nominal GDP would be an increase in this "equilibrium" price level rather than the actual price level. For the most part, the aim is to generate a rapid recovery without the need for rapid deflation.

Unfortunately, a level of nominal GDP of $17,912 billion in the second quarter of 2013, when divided by the projected value of potential out for that quarter, $14,756 billion, implies a price level of 121.4. That is approximately 7.3 percent higher than the current price level.

In the diagram below, the price level, measured by the GDP chain-type index, is shown in blue. The trend for the Great Moderation, from first quarter 1983 to fourth quarter 2007, is shown in red. A 2 percent inflation rate starting from the price level in the second quarter of 2011 is shown in brown. The price level expected from the "Reaganite" monetary policy, found by dividing the target for nominal GDP by the CBO estimate of potential output, is shown in green. 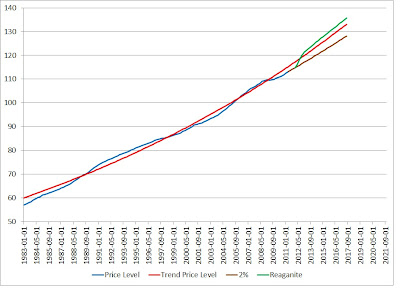 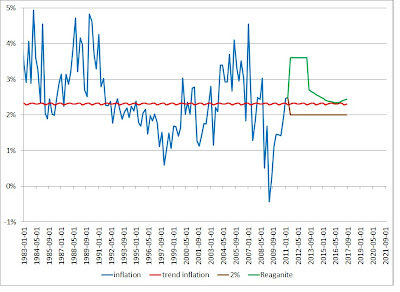 Over the two year period, the price level went up approximately 6 percent, an annual inflation rate of slightly more than 3%. Why would a similar policy have a somewhat more inflationary impact today?
Sadly, there has been a substantial productivity slow down during the last few years. During the Great Moderation, the productive capacity of the economy and real output both grew at approximately 3 percent per year. According to the CBO estimates, the growth rate of potential output has been much slower over the last five years
In the diagram below, real GDP is represented in blue. That is the production of goods and services, corrected for inflation. Potential output, the productive capacity of the economy as measured by CBO, is shown in black. The trend growth of both real GDP and potential during the Great Moderation is shown in red. 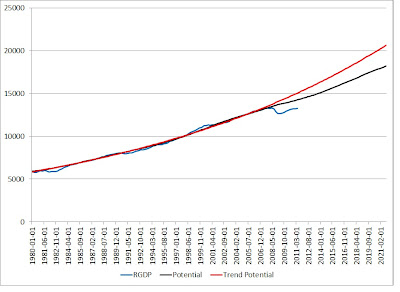 That the production of goods and services is currently well below the productive capacity of the economy is clear on the diagram, however, it is only slightly more than half of the shortfall of output from trend. According to the CBO, slower growth in productive capacity is also responsible for nearly half. Projecting those trends into the future, by 2020, potential output is forecast to be nearly 10% below the trend of the Great Moderation! 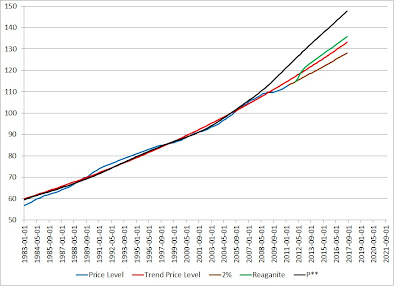 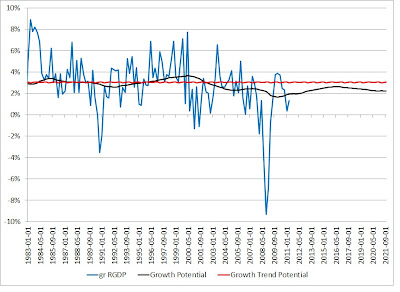 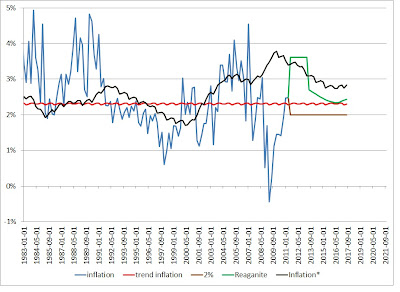 Notice that in the diagram above, the inflation rates generated by the "Reaganite policy" are not much higher than what would have occurred if nominal GDP had remained on the trend of the Great Moderation. Slow growth in the productive capacity of the economy would have resulted in inflation rates well above 3 percent.

Recently, Chairman Bernanke has said that monetary policy is no panacea. Given the performance of nominal GDP over the past few years, and particularly that it is nearly 14 percent below the trend of the Great Moderation, Bernanke's statement deserves the criticism it has received, particularly from Market Monetarists. Monetary policy can and should fix problems due to inadequate money expenditures on output.

However, monetary policy is no panacea for slow growth in productive capacity. What Bernanke needs to recognize is that slow productivity growth is not a reason to lower the growth path of money expenditures on output. Real output will grow more slowly, and inflation will rise. That a "Reaganite" monetary policy will sadly result in higher inflation when there is a productivity slowdown should be expected.

And that suggests are role for "Reaganite" fiscal and regulatory policy. Tax reform, control of government spending, and sensible deregulation can all help reverse the productivity slowdown. And that can result in both greater growth in real output and lower inflation.

Once the economy has recovered, and productivity growth has improved, it will be time to shift from the 5 percent growth path for nominal GDP to a 3 percent growth path. This would keep the price level stable on average, fulfilling Reagan's legecy and ushering in truly noninflationary prosperity.

It is time for the Republicans in Congress and the Presidential candidates to demand that Obama and Bernanke adopt a "Reaganite" monetary policy now. Step one--nominal GDP at $17.9 trillion for the second quarter of 2013.
Posted by Bill Woolsey at 9:12 PM