For the discussion regarding "reflation," George Selgin produced two graphs and Tom Dougherty produced one. 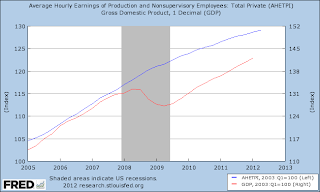 He interpreted this diagram as showing that while nominal GDP has recovered relative to its initial peak and wages have grown more slowly, wages have not grown slowly enough.

Dougherty complained that everyone was using wages for nonsupervisory and production workers, when all wages is also available.   He provided the following diagram (in a link to a comment on Sumner's blog.) 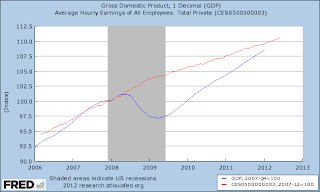 Aside from being a better measure of the whole labor market, the diagram appeared to show that this broader measure of wages has slowed its growth rate enough so that it is now in alignment with the recovery in nominal GDP.     Of course, it is interesting how different the nominal GDP chart appears.  (The problem with the data series on wages is that it only starts in 2006, so there is no way to observe its behavior during the Great Moderation or longer.)

Selgin then worked some more on his chart, still using the narrower measure of hourly wages. 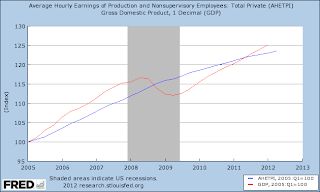 Unfortunately, nominal GDP has been growing faster than hourly wages for a long time.   Below is a chart looking at the growth rates of both and the trends from the Great Moderation (1985 to the end of 2007) 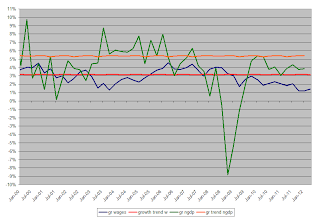 Nominal GDP grew a bit more than 5 percent and hourly wages a bit more than 3 percent.    Over the period from 2005 to 2012, this would create a gap of nearly 18 percent.  (2 percent a year compounded over 7 years)   In Selgin's last diagram, the growing gap between the index for nominal GDP and hourly wages before the recession is what would be expected given their different trends.    Even with the slow down in wage growth, I would think, at first pass, that nominal GDP would need to have increase about 18% more, rather than just 3% more.

Why the difference in growth rates?   The most basic reason is population growth.   If each worker makes 3 percent  more, and there are 1 percent  more workers, then their incomes are going  to grow 4 percent.   Why is wage growth 2 percent less than nominal GDP growth?    My guess is that it is mostly a trend in nonwage compensation over the period.

What about the difference between production and supervisory wages versus total wages? 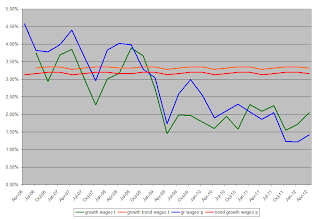 There isn't much pre-recession data to work up a trend for total hourly wages, but it was growing slightly more than wages for production and nonsupervisory employees during the Great Moderation.   The slow down in the growth of the two series is very similar.

In my view, the best way to look at these things is to compare the growth paths and trends.   When there is a big shift in trends, growth rates don't say much, and it is pretty clear that indexed diagrams don't help much either.


Posted by Mayor Bill Woolsey at 9:20 AM