Wages and Morale: How Important are Layoffs?

Kurt Schuler, on the blog Free Banking, linked to a paper by Shaikh on alternative microfoundations for macroeconomics and to a book by Belwy, Why Wages Don't Fall During Recessions.   While the Shaikh paper was interesting, I found it too ideological, though paradoxically in its constant refrain that neo-classical economics is ideologically aimed at defending capitalism.

Belwy's work involved interviewing businessmen about why they don't cut wages and instead lay off workers during recession.   He found that managers believe  paycuts reduce morale and so productivity.  When workers are  laid off, "the misery is out the door."

Consider the following framing of the problem.    We start at full employment, with firms hiring all the workers that want jobs.   Spending on output falls, so firms cut back production and lay off workers.   Some of the formerly employed workers are now unemployed.

When spending on output recovers, then firms expand production and rehire the laid off workers.   As the unemployed workers return to work, the unemployment rate falls until workers are again fully employed.

A brief look at the statistics regarding layoffs, quits, and hires suggests that this framing is wrongheaded.   Even when there is no "recession," and unemployment is low, there are many layoffs.     The number of quits is higher still.   And new hires are greater than layoffs and quits, resulting in growing employment.    The labor force is also growing, so unemployment remains stable and low.

Why do firms lay off workers when there is full employment?   Surely it is due to conditions peculiar to their firm or industry.   The market process of creative destruction involves decreases in the demands for particular products and so the amount of labor it is sensible for particular firms to use.   At the same time, creative destruction creates new job opportunities with firms and industries that are expanding.

While firms could cut the wages of all of their workers, or solely the wages of those they would otherwise lay off,  it is not at all obvious that this is sensible or desirable.   Cutting wages enough so that part of the workforce quits and finds jobs in expanding sectors of the economy is hardly rational for a firm wanting to keep its most productive workers.     Perhaps their industry will be one that expands in a few years, or even if not, that doesn't mean that their particular firm might not introduce a new product or production process and be able to expand market share and profits.

On the other hand, simply cutting the wages of the workers who would otherwise be laid off is less of a problem.     If they quit, the result is no different than if they are laid off.   Rather than a "pink slip," they get the pay cut, and that tells them that they better find a new job.

Managers apparently believe that it is better to "get the misery out the door."

Why is there a spike in layoffs during a recession?     Why don't firms cut wages in a situation where their workers have no good alternative opportunities?   Why do they instead lay off their workers?

This is the question upon which Belwy focuses, which is the natural one to emphasize given the naive framing--reduced demand for output,  workers are laid off and become unemployed, and then, when the economy recovers, they are hired back.

However, the more relevant question is why don't firms cut wages (or slow the growth of wages) enough to continue the level of new hires?

Even with no spike, the ordinary level of layoffs will result in a rapid decrease in employment unless offset by new hires.  Further, while quits drop during a recession, they don't fall to zero.    Unless there are sufficient new hires, these quits result in lower employment.   The new entrants to the labor force, both those who would be replacing some of who exit as well as the net growth in the labor force, will cause a rapid build up in the ranks of the unemployed.

Why do firms fail to cut wages, or even continue with previous rates of wage increases, while cutting back new hires?   Why do firms not only fail to expand their work force as usual, but allow it to shrink through attrition? 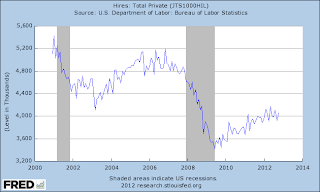 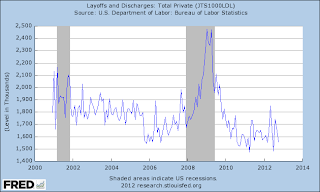 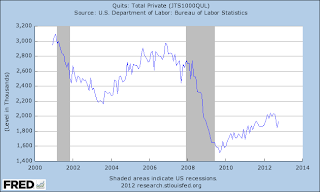 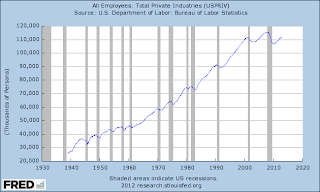 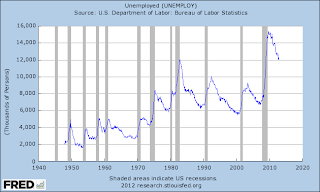 By the end of the Great Moderation, employment had reached approximately 110 million and there were approximately 7 million unemployed, but that was despite there being approximately 22 million layoffs each year.    Quits were even higher, nearly 34 million a year.     That adds up to 56 million separations per year.    Of course, new hires were running about 4.8 million a month, or about 58 million per year.   The 2 million difference allowed for growing total employment.

If new hires fell to zero, and the quit rate remained the same, then within a year, employment would fall in half.   Of course, quits fell off tremendously during the recession, to more like 20 million per year.   But with this lower level of quits and "normal" layoffs, separations would still be 42 million.   Without new hires, Great Depression levels of unemployment would rapidly develop in less than a year.

Of course, new hires didn't drop to zero.  Even at the lowest, new hires were at an annual rate of 43 million.    But the 15 million drop (per year) in new hires is the real problem that needs to be explained.

Sure, there were several months of  very high layoffs .   Three months of 2.5 million layoffs adds up  7.5 million unemployed--a significant number and roughly consistent with the increase in the number of unemployed.

Still, this was only 700,000 more layoffs per month than usual, and so that adds up to 2.1 million "extra" unemployed.

During that same period, new hires were approximately 1.2 million lower than "normal," which adds up to 3.6 million fewer jobs.

More importantly, after the "recovery" began, layoffs have been relatively low.   The real problem is four years of new hires being about one million "too low" each month.     It is getting to be close to 50 million "too few" jobs being created.   (Of course, if new jobs had been created at that rate, most of them would be filled by people who quit their old jobs.   Quits remain "too low" as well.)

Again, the real question isn't why firms layoff workers during a recession rather than cut wages.   It is rather why firms don't cut their workers' wages enough so that they can keep new hires at a level consistent with full employment.

That pay cuts (or no pay increases) would hurt morale remains a plausible explanation.   It is the focus on layoffs that is wrongheaded.

The right question to ask managers is why they don't give their current workers smaller raises, hire more workers (increasing starting pay less,) expand production more rapidly, and hold back on price increases to sell the extra output, and make more profit?
Posted by Bill Woolsey at 11:32 AM