The "Test" of Market Monetarism

Scott Sumner's first post on Econlog was about the "test" of Market Monetarism.   Market Monetarists have generally taken the view that monetary policy, broadly understood, is able to keep spending on output on a target growth path regardless of fiscal policy.   In particular, fiscal austerity can be offset.

Sumner had already commented on Paul Krugman and Mike Konczal's prediction  that the fiscal austerity in 2013 would throw the economy into recession along with their statement that it would provide a test of the Market Monetarist claim that the Fed can offset the effect of such a contractionary fiscal policy.    Sumner has generally been of the view that the Fed would in fact provide a monetary offset.

My own view is that the Fed could do so, though what it would do was more uncertain.    Until the Fed targets a growth path of nominal GDP, I don't see that there has been a test of Market Monetarism.

Sumner claims that Market Monetarism passed the test with flying colors.   He says that nominal GDP growth was about the same in 2013 as 2012.

Konczal linked to the following graph: 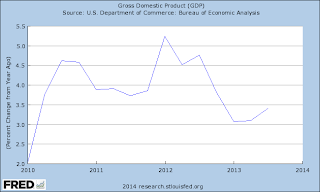 Bob  Murphy commented on the debate and implies that it certainly looks like nominal GDP growth is especially low during 2013.    The data presented here is growth from one year before.  The data is quarterly, but only the year is on the horizontal axis.
﻿ 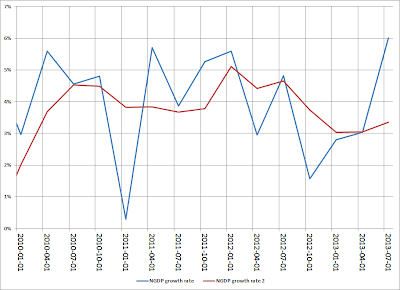 So, fourth quarter 2012 NGDP growth was extra low and third quarter 2013 NGDP growth was quite high.
Admittedly, Sumner often follows the modern economic convention of focusing on growth rates.   In my view, the last five years has shown that a narrow focus on growth rates is a mistake.   Instead, it is important to look at levels.
Let's return to the typical Market Monetarist diagram: 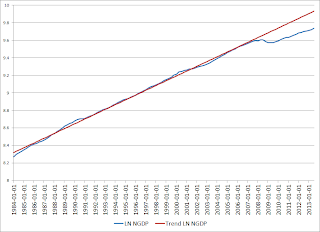 Nominal GDP remained on a remarkably stable growth path during the Great Moderation.   The recession that began at the end of 2007 was nothing unusual, but then there was a substantial drop in nominal GDP, and rather than return to its previous trend, it seems to have shifted to a substantially lower growth path that has a slightly lower growth rate.   Focusing on the slightly lower growth rate ignores the real problem--the lower level of nominal GDP.
﻿
The following diagram focuses on the Great Recession and snail-paced recovery. 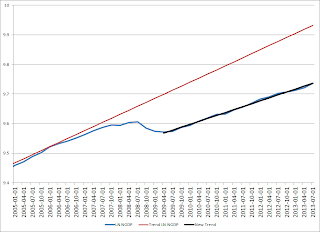 All of the focus on growth rates is really just the minimal fluctuations around this new trend.   The growth rate is 4 percent rather than the 5.4 percent of the Great Moderation.   (Sumner's 5 percent target adds the trend growth rate of potential output during the Great Moderation, 3 percent, with the 2 percent inflation target favored by modern central banks.   The actual trend was slightly more than 5 percent.)
Here is a close-up of the variation of nominal GDP from its new trend: 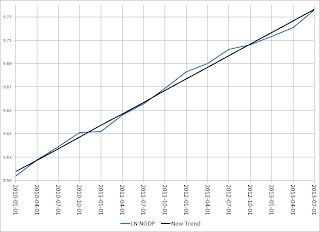 The largest deviations from this trend are .6 percent of nominal GDP.    During the third quarter of 2012, nominal GDP was .6 percent above trend.    By the second quarter of 2013, it was .6 below trend--a slightly more than 1 percent change.   And by the third quarter of 2013, it was almost at trend (.1 percent below.)
Looking at Market Monetarist diagrams, it looks like fiscal austerity has a small (approximately 1 percent) negative impact on spending that lasted less than a year.
In truth, I wouldn't expect much better if the Federal Reserve were explicitly targeting nominal GDP one year in the future.   But perhaps I should.
The problem is that the Fed's discretionary forward guidance with reference to the unemployment rate and inflation is not generating an adequate nominal recovery.   I think the economy needs a Reagan/Volcker recovery.   A year of 10 percent nominal growth.   And one year from now, that should be the start of a new target growth path.   While I would prefer 3 percent, the current 4 percent growth rate wouldn't be too bad.   In my view, it would be better than 5 percent much less the 5.4 percent of the Great Moderation.