“Marginally attached workers are persons who currently are neither working nor looking for work but indicate that they want and are available for a job and have looked for work sometime in the recent past. Discouraged workers, a subset of the marginally attached, have given a job-market related reason for not looking currently for a job. Persons employed part time for economic reasons are those who want and are available for full-time work but have had to settle for a part-time schedule.”

I had the same impression listening to these alarmist reports, but I think that the key question is how much the more inclusive measure has risen relative to the standard measure during the recession. And so, I looked up the figures.
The graph below shows the standard rate and the inclusive rate since 1999. 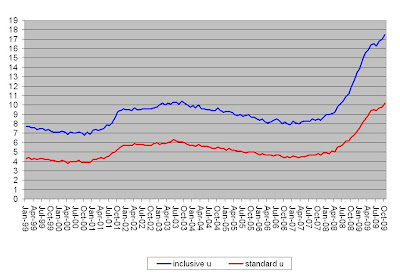 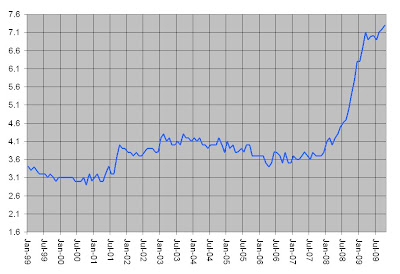 The difference increased from 3.8 percent to 7.3 percent. With a labor force of 234 million, that is a lot of people--about 17 million. The "extra" people in the uncounted group today relative to the more normal 3.8% would be about eight million.
What proportion of the people in the more inclusive group are uncounted by the standard measure? 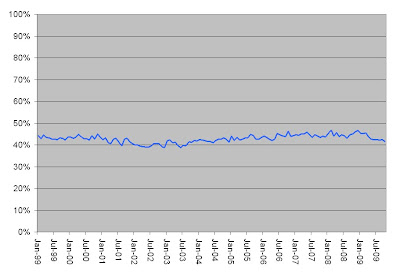 The Great Recession doesn't appear to have resulted in a large increase in "hidden" unemployment. I think the alarmist media reports are making the error of comparing the 4.9 percent standard unemployment rate at the beginning of the recession to the 17.5 percent inclusive measure of today.
On the other hand, millions of the people who are now discouraged workers, working part time but who want full time work and marginal workers, might be working if the economy were not in recession. Further, even when the economy is not in recession there are millions of people in those groups, suggesting that labor markets have problems. Is there an opportunity for free market reforms to generate a significant increase in potential income? The conventional wisdom (which I share) is that taxes and regulations disturb European labor markets, substantially reducing the productive capacity of Europe. These figures suggest that it is not so rosy in the U.S. either.
Posted by Bill Woolsey at 1:20 PM