However, the logic of that approach suggests that real expenditures (and real output) would increase at a 14.6 percent annual rate. That would be a happy result if possible. Unfortunately, even if the entire decrease in output was due to depressed sales, such a rapid recovery of production may be impossible. Even higher inflation might occur, resulting in the price level rising above its long term growth path. As production catches up, then inflation would again slow, this time moving down to the long term growth path.

There is reason to believe that the productive capacity of the economy has been reduced. Part of this is temporary--a need to shift labor and build capital goods appropriate to a new pattern of production, one that includes less residential investment. However, part of the shift will be permanent reflecting the loss of capital, including the skills of workers, specific to home construction. 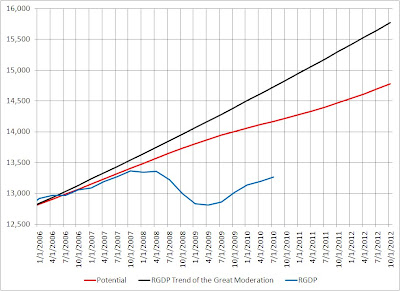 If money expenditures returned to its trend value of the Great Moderation in one year ($17,652 billion in the third quarter of 2011,) and real output returned to the CBO forecast of potential output, ($14,399 billion) the market clearing price level would be 122.6, which implies a 10.3 percent inflation rate and 8.6 percent growth in real output over the coming year. Again, assuming the CBO's estimates of potential income are correct, thereafter, the 5 percent growth path of money expenditures would be consistent with real output growing with capacity at approximately 2 percent a year and inflation running at 3 percent a year. If the return to the growth path of money expenditures is spread over 2 years, and the inflation rate over those two years would need to average 7 percent and real growth would be 5 percent per year.

However, if the CBO estimate of potential income is correct, then the price level consistent with the real expenditures equal to potential output ($14,399.6 in third quarter of 2011,) would be 114. This would imply about 2.6 percent inflation over the coming year. After that point, the 3 percent growth in money expenditures would result in an inflation rate of about one percent--at least if the CBO estimate of continued slow growth in productive capacity is correct. 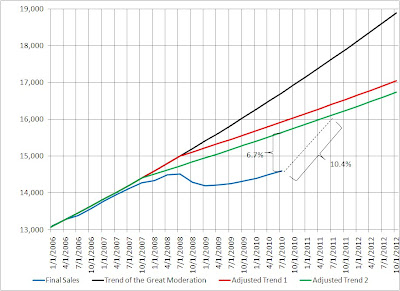 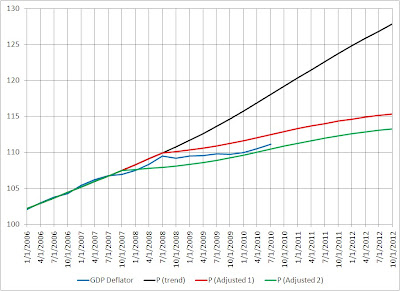