At Cafe Hayek, Don Boudreaux argues that the problem with the economy is not aggregate demand because:

Inflation-adjusted personal consumption expenditures in the U.S. today are higher than they were in the third quarter of 2007 (the quarter before the recession began). True, these expenditures are only about one-percent above their pre-recession level, but higher they nevertheless are – a fact that requires some twisting of Keynesian dogma in order to continue making a case for more government ‘stimulus’ spending.

He goes on to claim that the problem is investment rather than consumption. While mominal investment expenditures are too low, I think that right approach is to look at nominal consumption expenditures. They peaked in June of 2008 at $10,176 billion. The current value is $10,750.8 billion, which is 5 percent higher. 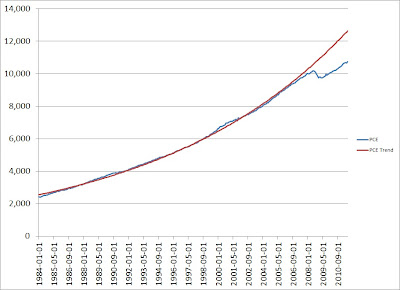 I believe that if prices and wages would drop to 14% lower growth path, then the current growth path of nominal consumption would be consistent with real consumption equivalent to that of the Great Moderation. Of course, prices dropped little and wages less.

Further, I have no problem with nominal (and real) consumption shifting to a lower growth path, if it is matched by increased investment or additional exports. I certainly agree that there is no necessity for expanded government spending to offset the decrease in consumption spending.

Of course, my "answer" is that the Fed needs to target a stable growth path for nominal GDP. I am quite certain that both investment and consumption expenditures would rise as soon as the Fed proved its commitment to reach that target by whatever amount of "quantitative easing" might be needed.