Selgin and Measures of Spending

George Selgin is worried that QE3 will lead to an unsustainable boom.   He is concerned that the Fed is repeating the mistake it made in 2002.   Sumner responded with skepticism that monetary policy was too expansionary during that period.   Sumner's view is "maybe a little."

1. NGDP grew at a slower rate during the 2001-07 expansion than during any other expansion during my lifetime.
2. NGDP growth modestly exceeded 5% during the peak of the housing boom.

Selgin came back suggesting that NGDP is the wrong measure of  spending on output.   He suggests that Final Sales to Domestic Purchasers is better measure of spending on output.   He correctly points out that Niskanen favored that measure.   Further, Market Monetarists are well aware that our "fellow travelers" among the "free bankers," have favored that measure.

Selgin reproduces a diagram from Niskanen showing the deviation of final demand from trend.

While the diagram uses Final Sales to Domestic Purchasers, much the same diagram can be shown using nominal GDP.   This diagram shows the deviation of spending on output from trend.   This is a diagram that is based upon a level target.    There was a large positive deviation during the Dot.Com boom.   From the point of view of a growth path target for nominal GDP, monetary policy was too expansionary during the Dot.Com boom.

However, the question at hand is not the Dot.Com boom, but rather the housing boom.    Niskanen's diagram ends with a closing gap from trend.   What happened?   Was the run up in housing prices and increase in housing construction due to an excessively expansionary monetary policy?   Was spending on output above trend during in 2002 to 2005?

Here are the levels of the two series: 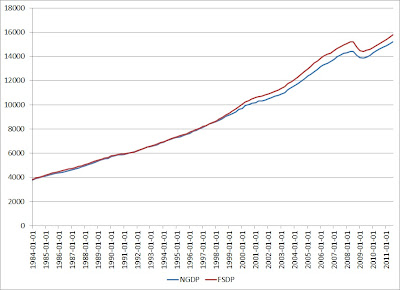 Final Sales to Domestic Purchasers is greater than Nominal GDP and gap looks to be increasing after 1998. How do they compare to trend?   Here is nominal GDP. 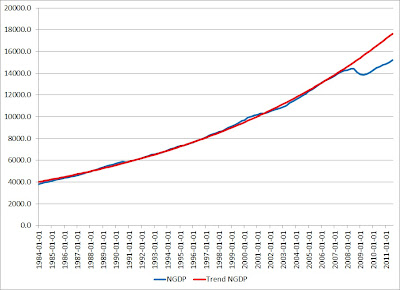 And here is Final Sales to Domestic Purchasers: 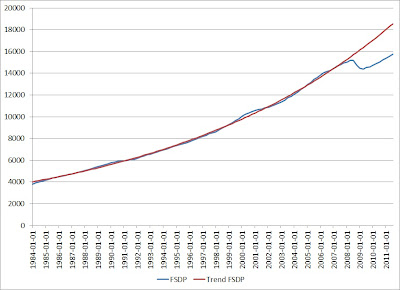 Both show the Dot.Com boom and that spending fell below trend in the 2001 recession.  It is true that Final Sales to Domestic Purchasers shows the a slight upward deviation starting in 2005, but it is pretty insignificant.

Selgin approvingly cites Niskanen, who argued that spending by Americans is more closely related to an excess supply of money for Americans than is spending on American products.    And so, he argued, Final Sales to Domestic Purchasers is the more appropriate target for monetary policy.

Further, not only is it unlikely that only imports would be impacted by an excess supply of money, there is a rather direct connection between "excess" imports and spending on domestic output.    Those foreigners selling the products now have the "excess dollars" which they would naturally sell for their own currency.   The resulting depreciation in the exchange rate makes exports cheaper for foreigners and imported goods more expensive.   That makes import competing goods look like bargains.   And so, through the depreciation of the exchange rate, an excess supply of money spent on imported goods rapidly translates into demand for domestic product--exports and import competing goods.   The ability of speculators to buy foreign currency can speed up the process.

But then, German car companies and their employees could take the money they earned from exports to the U.S. and put it in their German banks, and the German banks could purchase U.S. asset backed commercial paper, that is backed by mortgage backed securities, and the mortgages could be used to pay for over-priced houses in Las Vegas.   Final Sales to Domestic Purchasers would expand relative to nominal GDP.   And problems just might develop.   But it would not be because of an excess supply of money.

Suppose Chinese toy manufacturers retain earnings and hold them in Chinese state banks.   The Chinese state banks accumulate funds in the Bank of China, which in turn accumulates U.S. T-bills.   This occurs at such a rate that T-bill yields become very low.   Investors in U.S. money markets look for a better yield and buy asset backed commercial paper.   The assets backing the commercial paper are mortgage backed securities.   They are used to fund mortgages to pay for over priced houses in Las Vegas.   Again, Final Sales to Domestic Purchasers expand relative to Nominal GDP.   Problems might develop.   But it isn't because of an excess supply of money.

There is a sound intuition for leaving off inventories.   If spending on output grows "too fast" or "too slow" relative to productive capacity, then inventories will be depleted or accumulate.   In principles of economics this is called "unplanned inventory investment."    Avoiding "unplanned inventory investment" seems like a good idea, and so stabilizing final sales seems like a good idea.

For example, if an excess supply of money leads to higher copper prices, then copper inventories will be worth more.   This raises nominal GDP, but it doesn't raise any of the Final Sales measures.

Nominal GDP is not perfect, but it is better than Final Sales to Domestic Purchasers or Final Sales of Domestic Product.   In my opinion, as much as we honor Bill Niskanen as a pioneer, Market Monetarists have made some progress on these issues.

Even so, I share Selgin's concerns about promising to hold short term interest rates at a near zero rate for an extended period of time.   Similarly, I don't at all like it when the Fed purchases various longer term to maturity assets explaining that their goal is to lower long term interest rates.    Further, that the Fed generally kept nominal GDP close to a trend growth path in the Great Moderation, doesn't necessarily mean that the performance of interest rates or the quantity of money were the same as they would have been if the Fed had clearly articulated that goal.     Leaving aside the desirability of keeping nominal GDP on trend during the Dot-com boom, after nominal GDP fell below that trend, a clear commitment to return nominal GDP to trend could not only have resulted in a more rapid recovery in spending and output, but also resulted in a decrease in short term interest rates that was smaller and of shorter duration.  In other words, inflation targeting using an interest rate instrutment is a really bad idea.