Lars Christensen used the CBO estimate of potential output to show what inflation would have been if nominal GDP had been on a 5 percent growth path.    Marcus Nunes critiqued James Bullard's claim that the Federal Reserve has been successfully targeting the price level, since the Consumer Expenditures Price Index is close to a 2 percent growth path starting in 1995. 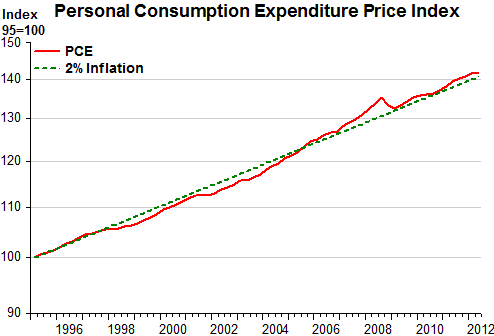 When I read Bullard's presentation, I was horrified.   Woodford endorsed nominal GDP targeting, but only as a  more politically saleable alternative to gap adjusted price level targeting.   Bullard (and the other economists helping him at the St. Louis Fed,)  forgot the "gap adjusted" portion of Woodford's proposal and went to straight price level targeting.   As Nunes points out, the consequence of the run up in oil prices for various consumer energy prices  in 2007 is shown on the chart.   Does Bullard really want to claim that a monetary policy that reverses that is desirable?    The diagram also shows that this measure of the price level is above target now.   Perhaps some further disinflation is in order?

As I have mentioned in my response to Selgin and my response to Christensen, a hypothetical target for some nominal variable does not explain actual excess supplies or demands for money and their disruptive impact on the economy.   Bullard at least says that central banks began thinking about a 2 percent inflation target in 1995.   I am pretty sure that Bernanke only got one adopted by the Fed recently.  The actual trend inflation rate for the Great Moderation was closer to 2.3 percent.   At least that is for the GDP deflator, which is the appropriate measure anyway.

However, my primary concern with Bullard's presentation came later with his sly implication that nominal GDP targeting was responsible for the Great Inflation of the Seventies.   While the actual culprit was probably unemployment rate targeting, this does translate well into real GDP targeting.   Both are a very bad idea.   And nominal GDP targeting is not at all the same.

The concept behind nominal GDP level targeting is to keep spending on output on a steady growth path.   The target for spending on output should grow at a slow, steady rate.  What happens to real GDP and the price level depends on what is happening to the productive capacity of the economy.

Rather than start with the CEP price index in 1995, suppose nominal GDP targeting had started back in 1959.   The output gap was was less than 1/2 percent.   To start with, suppose the target growth path was 5 percent.   First, look at the actual and target paths for nominal GDP. 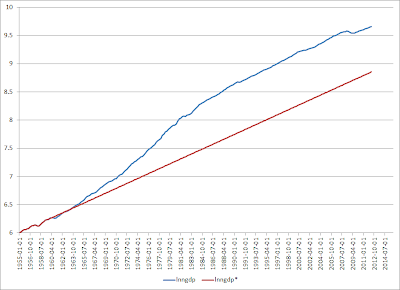 Nominal GDP is much higher today than it would have been if a 5 percent growth path had started in 1959.   What do the growth rates look like? 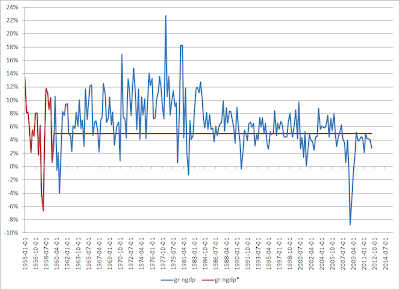 The rising trend of nominal GDP growth starting in the mid-sixties is apparent.    And what are the implications for inflation and the price level?   Suppose potential output followed the CBO estimate and real GDP remained at potential.   What would the price level have been? 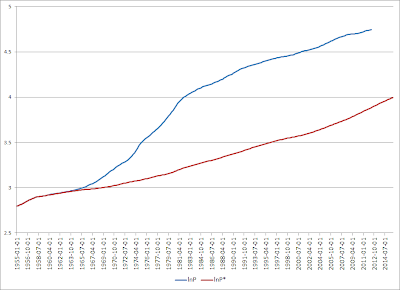 The actual price level is much higher than what would have happened if a 5 percent nominal GDP target had started in 1959.     It is 136% higher.  (And no, I don't think that targeting a 57 percent decrease in the price level would be wise.) 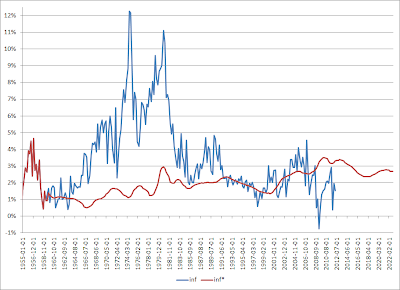 With a 5 percent growth path for nominal GDP starting in 1959, the inflation rate during the seventies would have remained below 2 percent.   It is only in 1980 that a slowdown in productivity growth that began in late 1979 would have raised inflation to nearly 3 percent.    According to the CBO, anyway,the "high" inflation period would be now--from 2008 to 2014, with inflation being only slightly above 3 percent.  We should expect a slight moderation of inflation in the near future.

Actual inflation during the seventies was much higher than what would have happened with a 5 percent nominal GDP growth path.   Aside from the 12 percent spike in 1974, it got worse and worse over the decade, getting as high as 11 percent.

Why?   Was it really because of poor productivity during the seventies?

My own preferred target is for a 3 percent growth path for nominal GDP.  Again, using the CBO measure for potential output and starting in 1959, what would the price level have looked like? 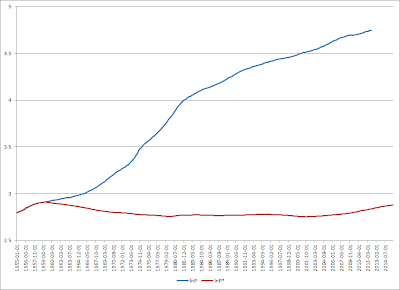 The price level today would be 85 percent lower than its actual value.  (And no, I don't favor a monetary policy aimed at an 85 percent deflation of prices.) 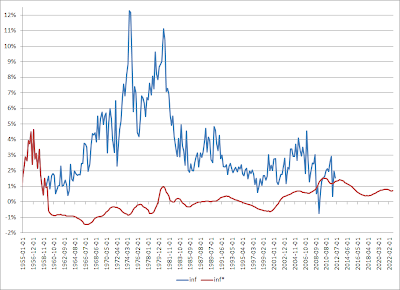 Posted by Mayor Bill Woolsey at 11:58 AM