More about the Productivity Norm

In Less Than Zero, George Selgin describes a scenario where an increase in supply in a single market is cleared by a lower price. Because demand is unit elastic, total expenditure remains unchanged in the market. If aggregate total expenditure in the entire economy is fixed, then aggregate expenditures in the rest of the economy is unchanged as well. The change in the one market with the increase in supply doesn't create a net excess demand (or supply) for other goods, and so no need for their prices to rise (or fall.)

But suppose there is a rule imposing a stable price level. What happens? The one price has fallen. The average of prices has fallen (assuming this price was included in whatever measure of the price level is to be stabilized.) To get the price level back up to target, it is necessary to increase the quantity of money, creating an excess supply of money at the current price level. In the long run, the prices of all goods, including resources, are slightly higher. Even the price of the good with the increase in supply is slightly higher than it would have been if there had been no increase in the quantity of money. Of course, it remains lower than it was before the increase in supply that initiated the entire process.

Selgin suggests that stabilizing the price level is needlessly disruptive. The context of this particular argument was "menu costs," the cost of changing particular money prices. Instead of simply lowering the one price with the increased supply, stabilizing the price level requires its price to fall, but a bit less, and all the other prices increase a bit. As Selgin emphasizes in other contexts, however, the menu costs is just one element of the problems created by an excess supply of money.

I am convinced. If there were a situation where a change in the price of a single good left the entire economy in equilibrium, creating monetary disequilibrium to get the price level back to a target would be undesirable. That a regime of price level stability could have this effect counts as a disadvantage.


Perhaps there is something to the "menu cost" argument, though I find it hard to believe that the growth process--one properly characterized as creative destruction--can be understood by thinking about an increase in supply in a single market with unit elastic demand. 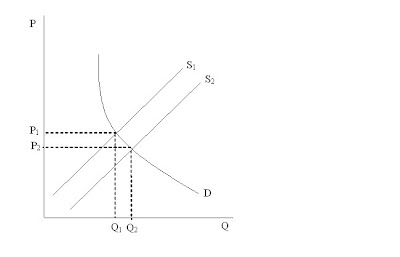 Selgin uses supply and demand analysis, and with demand unit elastic, (I did my best to draw a rectangular hyperbola,) expenditures on this product and revenues received by sellers are unchanged by the lower price and higher quantity. P1*Q1 = P2*Q2. If aggregate nominal expenditure is unchanged (or left on the same growth path,) then this change leaves total expenditures in the rest of the economy unchanged as well.

However, what does this imply using indifference curve analysis? 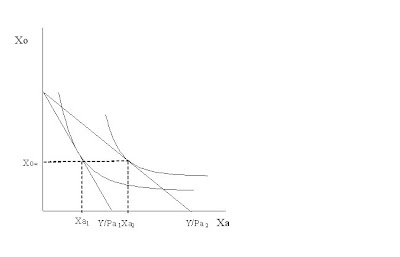 This diagram shows income Y and the higher price Pa1 and then the lower price, Pa2. Preferences are such that the decrease in the price of the good results in an increase in consumption from Xa1 to Xa2. The demand for the composite good, Xo, remains unchanged.

I suppose it is just my priors, but I think that part of the growth process should instead be characterized by the following indifference curve diagram: 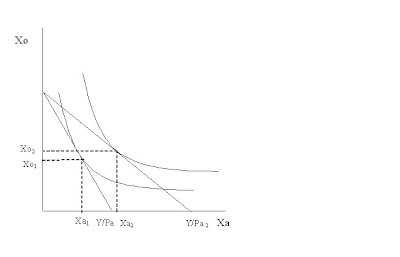 One important aspect of the process of creative destruction is that improved technology allowing greater productivity for one good allows resources to be freed in order to expand the production of other goods. The market process allows improvements in the technology for producing one good to increases the production of whatever particular goods people want to purchase most with the additional real income. An unfortunate side effect of this process is technological unemployment.

How does this relate to the productivity norm? The operations of such a monetary regime would not interfere with the process. Total expenditure on other goods would expand. It does suggest, however, that the impact of a regime of price level stability--higher prices of other goods and services, partly offsetting the lower price of the particular good with improved productivity--would occur with a productivity norm, though to a smaller degree.

A second aspect of the growth process is more difficult to describe using supply and demand diagrams or indifference curves--the introduction of new and better consumer goods and services. Perhaps it is an illusion, but that is the element of "creative destruction," that seems most important to me. How does that relate to the productivity norm?

I think the most plausible scenario is that more is spent on the improved good. There is a higher price and quantity that good. (For a new good, it is clearly higher than the zero price and quantity before it existed) Less remains to be spent on other goods and services. The price of the improved good rises (or there is a new price introduced into the economy.) Other prices fall. The impact on the price level is ambiguous, but let us take that to mean more or less unchanged.

Rather than deflation, this element of the process of creative destruction has little impact on the price level. However, our price level statisticians would note that the apparently stable CPI is allowing the purchase of higher quality goods and services. Using either crude or sophisticated methods to make adjustments, they would show a decrease in the "cost of living." In other words, the statistics would report deflation. Rather than hearing complaints that the CPI understates the inflation that average people can see, the complaints would be of the imaginary deflation that is being reported by the statisticians.