My Growth Path Target for GDP

The Fed should explicitly target GDP for the first quarter of 2012 at $16.2 trillion. Well, that is my position. This target is on a growth path that has a three percent growth rate beginning at the level of GDP consistent with the trend of the Great Moderation (from 1984 to 2007).
Some have criticized this particular growth path as arbitrary.
While I don't think it is entirely arbitrary, as can be seen by how closely the new growth path matches the actual path of GDP before the GDP collapse in the fall of 2008, I will grant that some slightly different path might be equally good or better. 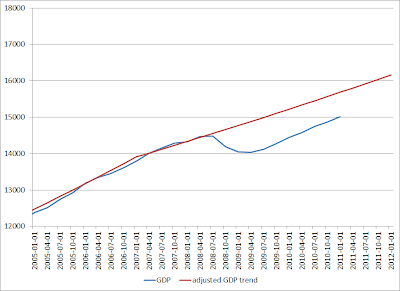 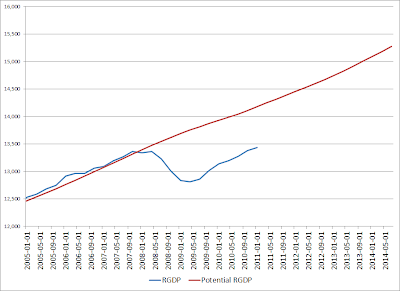 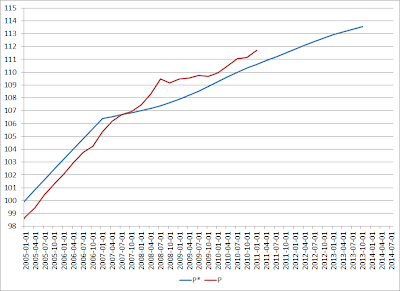 The target growth path of GDP, however, continues to grow from that point at a 3 percent annual rate. According to CBO estimates, the growth rate of potential output will continue to be lower than the long run trend for a substantial period of time, so the price level consistent with the target and potential output would rise. By the first quarter of 2013, it would be 113 and by the first quarter of 2014, it would be 113.5.
So, the adjusted growth path for GDP is consistent with closing the entire output gap (as estimated by the CBO) and a stable price level over the next year. However, if inflation doesn't drop to zero immediately, there is room for a somewhat less rapid disinflation.