A Target for Per-Capita GDP

For many years, I have advocated targeting a growth path for money expenditures and have come to believe that GDP is the least bad measure. However, considering the possibibility of catastrophic supply shocks, perhaps per capita GDP is a better target. (David Beckworth often looks at per capita spending.)

Even if there is a sharp drop in labor productivity, higher prices at given levels of nominal incomes seems like a reasonable way to signal to reduction in real incomes. However, if we imagine the population falling by 10 percent, there seems to be little point in having per capita money incomes rise by 10 percent along with prices.

During the Great Moderation, like GDP, per capita GDP remained very close to a trend growth path. The growth rate, however, was slightly lower--4.3 percent. 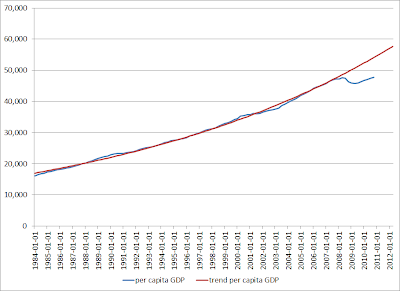 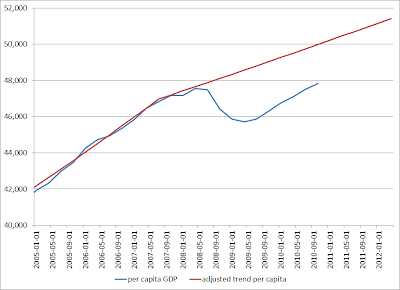