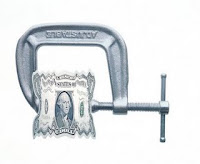 When people have less money than they want to hold, they reduce their expenditures or sell nonmonetary assets. It is likely that at least some of the effect of an excess demand for money will be reduced expenditure on output--currently produced goods and services. It is likely that firms will partly respond to the reduced sales of output by cutting back production.

Yeager, following Keynes, describes this process as an application of the "Fundamental Proposition of Monetary Theory." The individual can adjust his or her quantity of money to the amount demanded, but the economy as a whole must adjust the demand to hold money to a given quantity of money.

The fundamental proposition of monetary theory is related to the "Paradox of Thrift." The paradox of thrift claims that an individual can increase saving by reducing consumption, adding to net worth, and expanding his or her ability to consume in the future. However, when everyone tries to save by reducing consumption expenditures, firms sell less and produce less. This reduces real output and real income. Since lower real income plausibly reduces saving, the effort to increase saving by reduced consumption expenditures can fail for the economy as a whole.

A variant of the paradox of thrift focuses on credit markets and debt. Saving is the difference between income and consumption. Individual households can save by spending income on assets, like stocks, bonds, or real estate, rather than consumer goods and services. The accumulated assets represent an increase in net worth.

An individual can also save by using income to pay down existing debt rather than purchasing consumer goods and services. By reducing liabilities, this also increases net worth.

Finally, a household can save by reducing expenditures of money on consumer goods and services and not spending it on anything. The accumulated money balances is an increase in assets, and so, in net worth.

It is this last avenue for increasing saving--spending on nothing and accumulating money--that is one aspect of the fundamental proposition of monetary theory. The second avenue--paying down debt--is related to claims that households are currently "overleveraged," with too much existing debt relative to their incomes, and that this results in a decrease in aggregate expenditures and reduced output.

However, this cumulative rot only applies to an excess demand for money. If individual households choose to save by spending on nothing and accumulating money, then expenditures on consumer goods fall without any offsetting increase in expenditures on anything else. Those selling consumer goods receive less money in payment, and so they now are short on money. In order to rebuild their money holdings, they reduce expenditures, and so on. One way that the demand for money can decrease enough to match the existing quantity of money is for real income to fall.

What about saving by purchasing assets? What about saving by paying down debts? When households use income to purchase stocks, bonds, or real estate, those selling the assets have the money. What do they do with it? If they hold it, then there is an excess demand for money. If not, then they spend it. If they spend it, what do those receiving the money do with the funds?

Similarly, when saving occurs through a repayment of debt, those who had lent the funds receive the money. If they hold it, then there is an excess demand for money. If they spend it, then what do those receiving the money do with the funds? The only peculiarity of the process regarding credit is that if the loans had been funded by monetary liabilities, then the repayment of the loans can result in a decrease in the quantity of money. Other things being equal, that creates an excess demand for money.

Thinking about what happens to the money when it is saved is not supposed to suggest that there cannot be an increase in the demand for money, (or a decrease in the quantity of bank created money.) It is rather to show that saving can only generate the sort of cumulative rot that would create a paradox of thrift if it either directly or indirectly creates an excess demand for money. There is nothing to the paradox of thrift other than a distorted version of the fundamental proposition of monetary theory.

It is hard to imagine that anyone would consider a reduction output, employment, and real income to be an acceptable, much less optimal, response to an excess demand for money. The most important aspect of economic actitivity is the use of scarce resources to produce the consumer goods and services that people want most. The process of production, earning income, and the expenditure of that income on the produced output is essential that activity.

But a shortage of money is not one of those things. Disrupting the production of goods and services, reducing real output, employment, and real income, in order to impoverish people enough so that they are satisfied with the existing quantity of money is unacceptable. The level of real income that would exist without such disruption is potential income--the productive capacity of the economy.

It is when the quantity of money is less than what the demand for money would be if real income is where it should be.

And where should it be? It should be equal to potential income."Tight money" exists with the quantity of money is less than the demand to hold money when "the" real interest rate is equal to the natural interest rate which coordinates saving and investment and real income is equal to potential income, the productive capacity of the economy.
"Tight money" might cause nominal interest rates on nonmonetary assets to rise, reducing the demand to hold money. "Tight money" might cause real income to fall, reducing the demand for money. But neither of these things count as fixing "tight money," they are rather symptoms of the disruptions created by "tight money."
I have already discussed the interest rate on money, both currency and deposits in other posts, but there is more to be said--especially how changes in those interest rate could, but are unlikely to, correct "tight money."
Of course, there are two other key macroeconomic variables that impact money demand-- the price level and its expected rate of change. How do they relate to "tight money?" In my view, it all depends on the fundamental nominal anchor of the monetary system and the economic order.
Posted by Bill Woolsey at 12:28 PM