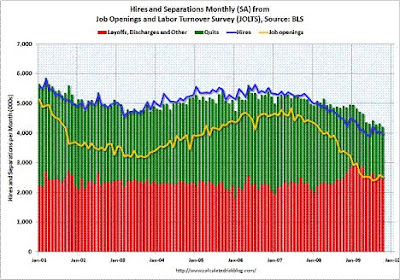 Karl Smith posted this very interesting diagram from the Bureau of Labor Statistics. While there was quite a jump in layoffs and discharges as nominal expenditures and output fell during late 2008, the reduction in new hires and vacancies is much more significant and began a year earlier. It is interesting that there are usually more quits than layoffs or discharges, and while that is now reversed, there are still nearly as many quits as discharges. 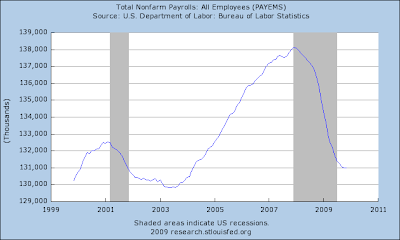 Total employment dropped by about 7 million since 2007. The green area above the blue line (the sum of total separations less new hires each month) looks very small, but it accumulates fast.
Posted by Bill Woolsey at 1:22 PM