Steve Hanke argues that Federal Reserve policy was too expansionary three times during the Great Moderation. (Hat tip to Greg Ransom.)
Hanke has the right idea. Rather than looking at the federal funds rate or CPI core inflation, he looks at a measure of nominal expenditure. Unfortunately, he uses final sales to domestic purchasers. Regardless of whether or not the Fed's policy was too expansionary, that is the wrong measure.
If there is an excess supply of money, expenditures will increase. However, the problem is that expenditures can outstrip the productive capacity of the economy.
While final sales to domestic purchasers measures how much U.S. residents spend, the "problem" to be solved is avoiding excess (or inadequate) expenditures on U.S. products, regardless of where the buyers reside. That is why total final sales of domestic product is the proper measure.
The two measures are shown below, with the gap reflecting the trade deficit. 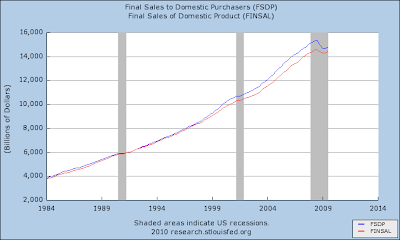 The growth rates of the two aren't really that different. Presumably, if Hanke used the "correct" measure of nominal expenditure, he could make an equally good case for an excessively expansionary Fed policy. 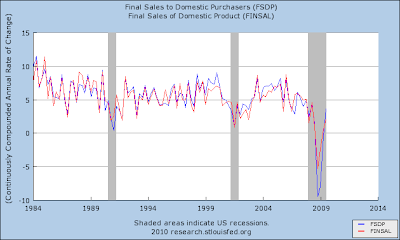