The Price Level and Inflation Using the GDP deflator measure of the price level, its value during the 4th quarter of 2009 was 109.93 which means that prices were nearly 10 percent higher than in 2005. This is an all time high for the price level.
Comparing to the trend 2.3 percent growth path of the price level during the Great Moderation, the current value is 1.5% below the 111.6 trend value. 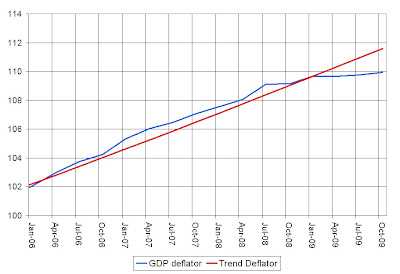 The price level rose at a .62 percent annual rate from its value in the third quarter of 2009. This current low inflation rate, as well as the inflation rates for the other quarters of the Great Recession are substantially below the trend rate of inflation. 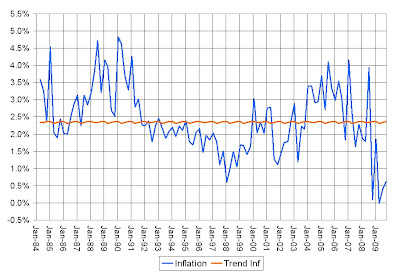 Other things being equal, I think the current low inflation rates are much better than the trend of the Great Moderation. If anything, they remain a bit high. The one quarter of "deflation," the drop of the deflator from 109.661 in first quarter 2009 to 109.656 in second quarter 2009, (a drop of .005 which is multiplied by four to get the .02 percent annual rate) is as close to price stability as can reasonably be expected.
However, other things aren't equal. There is good reason to believe that potential output is depressed, and the least bad response to such conditions is stable growth of nominal incomes, allowing higher prices to clear markets and lower real incomes. In other words, the productivity norm advocated by George Selgin is the least best approach, though I favor a zero inflation trend rather than his preferred mild deflationary trend.
Worse, real output is far below its long run 3 percent growth path. And while estimates of potential output are also below trend, there remains a substantial output gap. Since it is likely that there has been some adjustment to lower nominal expenditures, as shown by the price level and inflation rate both falling below trend, (and the growth of nominal wages has slowed a bit,) returning nominal expenditures to their previous growth path is going to cause some disruption. That is one reason for modifying the growth path of nominal expenditures.
I favor shifting to a new, lower growth rate backdated in the past, (3 percent backdated to third quarter 2008,) reducing the needed increase in nominal expenditures to return the the targeted growth path. The notion that this would work perfectly, with a smooth return of prices and output to equilibrium levels would be an example of the fatal conceit. Still, I think something along those lines is the last bad option.
Posted by Bill Woolsey at 7:36 AM