Is Inflation "Too Low?"

I favor targeting a growth path for nominal expenditure. The growth rate should be 3 percent. Because of the 3 percent trend growth rate of real output, that should result in zero inflation on average.
Suppose the Fed had been able to keep nominal Total Final Sales of Domestic Product on a 3% growth path for the entire period for the Great Moderation--from 1984 until today. Further assume that the CBO estimate of potential output is correct and that nominal expenditure targeting always left real GDP equal to potential output.
What would have inflation looked like during the Great Moderation?
What would inflation look like today, during the Great Recession?

First, a look at the simulated value of the GDP deflator. 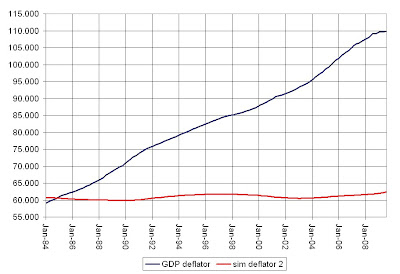 Rather than nearly doubling, the price level, as measured by the GDP deflator, would have stayed very close to 60, that is, prices would have stayed at about 60% of their 2005 level for the entire period. The highest price level would be the most recent one, 62.35 and the lowest in the third quarter of 1989, 59.93. The difference is 4%.
Next look at inflation for the entire period. 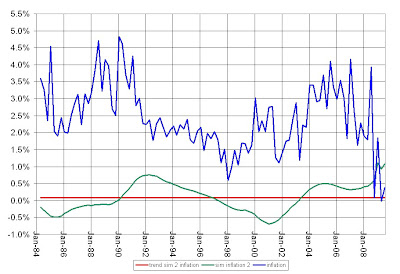 There is a slight trend inflation over the period, a bit under .1 percent. The most severe deflation rate would have been in the first quarter of 2001, at a -.7 percent annual rate. 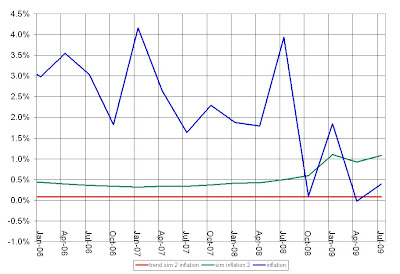 The highest inflation rate would have been in the first quarter of 2009, at a 1.1 percent annual rate. The third quarter of 2009 is nearly as high, with a 1.08 percent annual rate.
According to the CBO, potential output is currently more than 4 percent below the long run trend growth path of real GDP. If the Fed could keep nominal expenditure on a 3 percent growth path, a substantial deviation of productive capacity from trend would have led to only mild inflation.
This "ideal" inflation rate is well below the actual rate of inflation for most of the Great Moderation, until the Great Recession begins. Inflation has been "too low" by this standard in the fourth quarter of 2008, and the second and third quarters of 2009.
I guess I just have to admit it -- there is a sense in which I think that inflation today is too low.
Posted by Bill Woolsey at 11:02 AM