Why Such a Deep Recession?

Arnold Kling notes that many economists other than Scott Sumner argue that the recession has been too deep to explain by recalculation. He then goes on to claim that no macroeconomic theory can explain the depth of the recession, especially, the large decrease in employment.
I believe that Sumner has a sound approach to understanding the crisis. There has been a modest reallocation of resources, involving in modest decrease in productive capacity relative to trend and a modest increase in structural unemployment. That has been overlaid with a large drop in nominal expenditure below trend. Firms have responded partly by slowing price increases, but mostly by reducing production. Real output has dropped well below capacity and the unemployment rate has risen far above the natural unemployment rate.
Kling translates all of this into a claim about the equation of exchange (Y = expected MV/P,) and dismisses it as hand waving. He claims that Sumner favors more inflation. Further, he claims that Sumner explains the drop in real output as being caused by an increase in real wages.


All of Kling's interpretations of Sumner have some basis in Sumner's writings. And just about every one of them is due to problems in Sumner's efforts at explanation. Kling (and maybe most other economists) latch on to these problems.
For example, Sumner uses "nominal income" to refer to nominal expenditures. In equilibrium, they are the same. But the theory is that nominal expenditure falls and firms respond by producing less output. The nominal value of that output falls to match nominal expenditures. The problem is that an imbalance between the quantity of money and the demand to hold
money results in less expenditure on final goods and services, and that this results in less production and employment. The problem isn't simply that nominal income is too low.

Sumner constantly complains that the market expects less inflation than what had appeared to be the Fed's "target" and that this is responsible for low output. Sumner generally justifies
using this approach by claiming it is necessary to communicate with all of the macroeconomists who think in terms of inflation and expected inflation. The problem, however, is that nominal
expenditure is growing well below trend, not that actual or expected inflation is too low. For the
most part, lower inflation and expected inflation will dampen the output effects of reduced nominal expenditure.
And finally, Sumner focuses on sticky wages and how flexible product prices in the face of sticky wages lead to undesirable changes in real wages and employment. Sumner interprets some episodes in the thirties in a way that justifies this approach. However, changes in nominal expenditure can cause changes in output and employment without there being any change in real wages. Firms sell less, so they produce less, and they employ less. Nothing in the process appeals to changes increases in the real wages paid to workers.
The best measure for nominal expenditures is total sales of final product. This measures spending on U.S. goods and services. This measure peaked in the third quarter of 2008, at $14,587 billion. It fell during the fourth quarter of 2008 and the first quarter of 2009, hitting a trough of $14,305 billion. It dropped 1.9 percent.
If the prices of goods and services had fallen 1.9 percent as well, then the real volume of purchases could have remained the same. (Of course, those who are not monetary disequilibrium theorists would argue that nominal expenditures would have fallen an additional 1.9% in response to the lower prices, and money balances would have passively increased. ) In fact, the prices of goods and services increased approximately .5 percent, and so the real volume of expenditure could purchase 2.4 percent fewer goods and services.
Nominal expenditures have recovered a bit. The most current data is for the third quarter of 2009. Nominal expenditures were $14,399 billion. And so, they remain 1.27 percent below the peak. The price level is about .6 percent higher, so the real volume of expenditures is just about 1.9 percent below peak.

The real volume of output peaked in the second quarter of 2008 at $13,415 billion (in 2005 dollars.) The trough was in the second quarter of 2009, at $12,902 billion. That is a 3.83 percent decrease. So, the timing for the fall in real output is a bit different from the fall in nominal expenditure (starting sooner and ending later.) Further, the drop real output was greater than the drop in nominal expenditure. Even after the slight increase in real output in third quarter of 2009, it remained 3.3 percent below the peak.
Employment can be measured using either establishments or households. The peak employment for establishments was 138.2 million in December 2007 and it has yet to trough. Its most recent value was 130.9 million in December 2009. That is a 5.24% drop.
Employment measured by household survey peaked in January 2008 at 146.4 million. It dropped to 137.8 million in December of 2009, a drop of 5.9%.
What about wages? Average hourly wages of private industry has grown every quarter since 1984, at a 3.15 percent annual rate. Since employment began to fall in the fourth quarter of 2007, average wages have increased from $17.66 to $18.64, an increase of 5.6 percent. During the two quarters that nominal expenditures fell, nominal wages increased from $18.16 to $18.46, a 1.7 percent increase. During the period real output was falling, nominal wages rose from $17.99 to $18.52, an increase of nearly 3%.
Adjusted for inflation using the GDP deflator, real wages increased at a trend growth rate of .8 percent per year. Since employment began to fall, real wages have increased from $16.45 to $16.69 in 2005 dollars. That is a 1.43 percent increase. During the period nominal expenditure was falling, real wages rose from $16.62 to $16.65, a .4 percent increase. And during the period real output dropped, real wages rose from $16.52 to 16.65, a .8 percent increase.
Since employment began falling, real wages dropped only in the third quarter of 2008--at a .1 percent annual rate. However, nominal wages rose at a 3.8 percent annual rate, so the extra high inflation, at 3.94 percent annual rate using the GDP deflator, appears responsible for the drop in real wages.
So, the drop in employment has lasted longer than the drop in real output and it was substantially deeper. The drop in real output lasted longer and was substantially deeper than the drop in nominal expenditure.
That doesn't mean there was no connection. The two quarters with the 1.9 percent decrease in nominal expenditures showed a 2 percent drop in real output and a 2.6% drop in employment.
However, when there is an inflationary trend, problems can develop without nominal expenditure dropping--a decrease in the growth path is enough.
The trend growth rate of nominal final sales from 1984 until the third quarter of 2008 was 5.4%. The trend growth rate of the GDP deflator was 2.4%. This was consistent with a 3% trend growth rate of real output. The average growth rate of potential output was 3.3%.
The trend growth rate of employment by the household measure was 1.35%.
The level of nominal expenditure for third quarter 2009 consistent with trend is $15,870.9 billion. It may be only 1.27 percent below its peak value, but total final sales are 9.28% below trend. 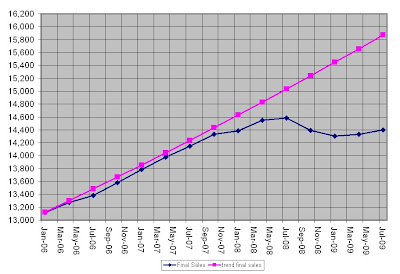 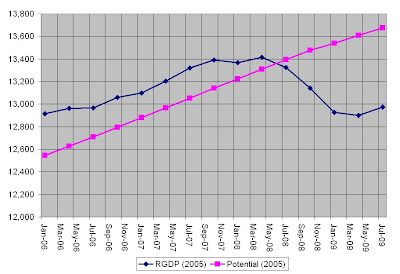 The GDP deflator only decreased during the second quarter of 2009. The -.02 percent annual rate of change is probably as close to zero as can be expected. Still, the trend for the GDP deflator for the 3rd quarter is 111, and its current value of 109.8 is about 1.12% below trend. 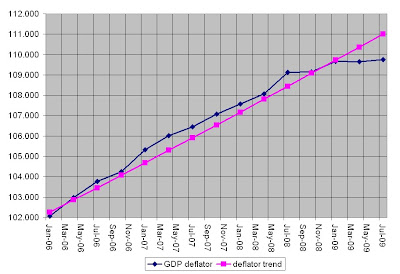 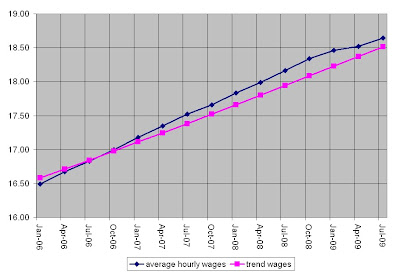 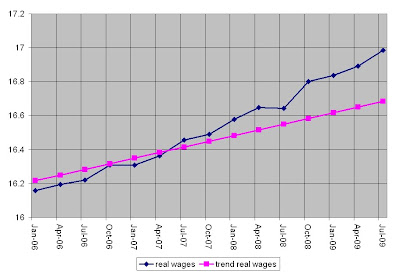 Most remarkably, the trend for employment by the household measure for December of 2009 is 152.1 million. Employment is 9.4 percent below trend! 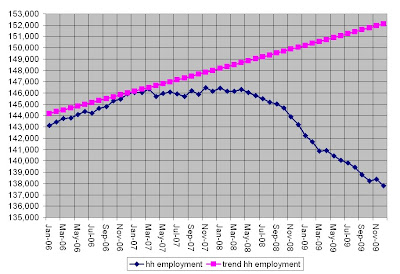 Is there any possible explanation for a 9.4% drop in employment below trend? Could it just be chance that nominal expenditure is 9.24% below trend? Maybe.....
Posted by Bill Woolsey at 10:21 AM