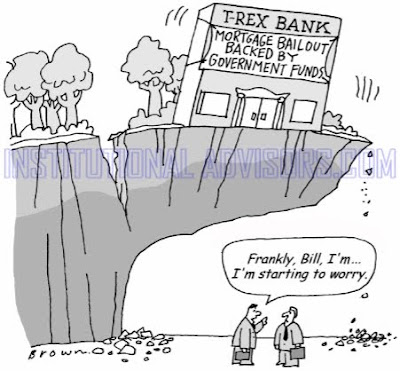 Nick Rowe has an excellent post on what he calls the orthodox and the heterodox views of how bad banks cause problems.

What he calls the heterodox view is right out of Yeager. Banks create money and so can lend money into existence. An individual can correct a shortage of money by spending less. The result for the economy as a whole is lower nominal expenditure.

Some complications are that banks fund their activities with a variety of liabilities, only some of which plausibly serve as money. Further, banks hold a variety of assets, with different legal requirements for capital. Further, it is plausible that the amount of capital required to reassure depositors is different for different sorts of assets.

A capital constrained bank can fund more of its asset portfolio with monetary liabilities--checkable deposits. It can shift its asset porfolio from commercial loans to short term, low risk securities. Short term government bonds are obvious. In the U.S. there is a zero capital requirement for government bonds, and it would be sensible for banks too keep little capital to the degree Treasury Bills make up a large portion of their asset portfolio. Interest rate risk suggests that some capital is necessary if banks hold long term government bonds, but perhaps less than commercial loans.

And that is the rest of the story--how Rowe's orthodox and heterodox views can be made consistent.
Posted by Bill Woolsey at 8:41 AM